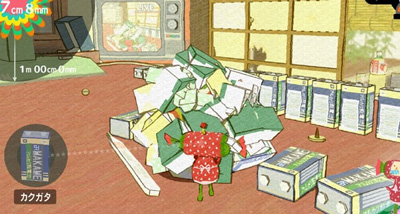 With a varied amount of new situations to roll through, Katamari Forever on PS3 and Xbox 360 brings a vast amount of bizarre content. New art styles match the fresh gameplay and a fun storyline, and though some of the play can become repetitive, there isn't an ounce of boredom here.

I'm a huge fan of Japanese randomness and it comes by the bucket load in Katamari Forever. Humans built from blocks with their little right angled arms flapping in terror as they get stuck to a giant ball brings a genuine smile to my face, no matter how many times I see it.

Having played other games in this series I'm aware that this version is an amalgamation of old levels alongside some new ideas levels and game types. This was of no matter as older levels come wrapped in an all new skin that really appeals to me on an aesthetic level.

The simple mechanics in Katamari Forever pull me away from the mediocrity of real life. The dreamlike space it creates couldn't be more different. The King asks such random tasks that wouldn't be out of place in the shifting sand of a waking nightmare. Keep the Katamari hot by rolling spicy foods. Make a Katamari of exact proportions or rolling a sumo wrestler Katamari, ensuring he's big enough for his fight.

If anything can make me forget about my troubles or focus me on a game, it's this.

In this strange neverworld, rather than feeling unsettled and woozy from the wierd and bizarre visuals and play mechanics, I find a genuine sense of escape. If anything can make me forget about my troubles or focus me on a game, it's this.

My personal favourite had to be the simplest one, which involved sucking up water with the Katamari and rolling across a desert creating a beautiful vista. I adored every second, creating my own little world, watching each flower bloom and blossom, bright colours burst from every inch of the screen giving me a huge sense of satisfaction and joy. I've not felt this excited by something I'm looking at since the kaleidoscopic colours of old 16-bit SEGA games.

Everything within Katamari Forever felt like an extension of my senses, not because I've experienced the game before but because it relies on instincts. Each movement of my thumbs isn't controlled by my brain but by my eyes, noticing the details that are needed to complete my mission and moving towards it without a second thought. Katamari Forever doesn't feel like a game to me, it's an experience in communication. Not just between me and the game but between my wife and I whilst I play.

My wife adores chiming in from over my shoulder about how quickly I'm building my Katamari or what I should be rolling up.

My wife adores chiming in from over my shoulder about how quickly I'm building my Katamari or what I should be rolling up. She, like me, was amazed by the random features of the characters. My daughter has also started paying attention when we play, laughing as I roll up a line of skyscrapers or when I chase the wildlife in the zoo. This is definitely a game that the whole family can get involved in, once I unlocked the eternal mode, which allows you to just roll the Katamari rather than play against the time, I gave the controller to my daughter and just watched her enjoy herself. Although she didn't really know what to pick up she still rolled around the game world giggling with glee.

With the one note play mechanic, it's a great game to play in short bursts, a few levels at a time. I tend to play after playing something else, as a way of cooling down and relaxing. I may be slightly bias as a huge fan of the series or anything with a Japanese quirk to it, but this will always be a game that I will come back to. Just for the experience.

You can support Andy by buying Katamari Forever