Other GamePeople columnists have reviewed this from their perspective - huh?:
Haiku Gamer (PS3)
Scared Gamer (PS3) 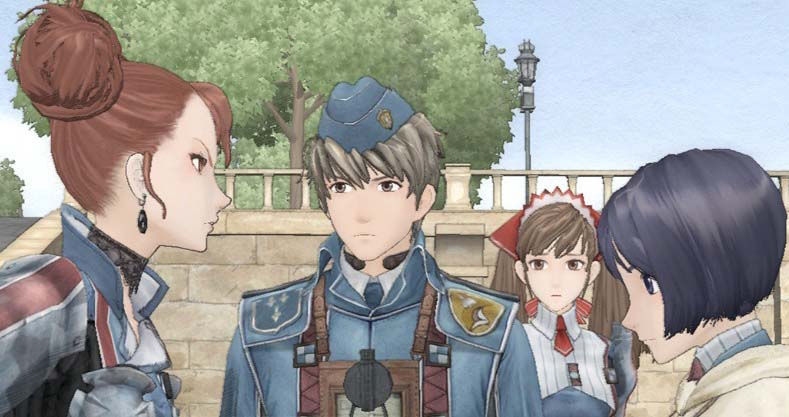 Strategy games provide experiences that require quick thinking, and forward planning from the gamer. They combine the unfolding tactics of classic games like chess, with more recent board games such as Risk. Usually focusing on a theatre of war context, players enjoy the tactical overview of the battle these games provide.

Valkyrie Chronicles is unique because of its real time play elements. The majority of strategy role play games are turn based, where as the action sections here are played in real time. Rather than moving your character around a tile based map, Valkyrie Chronicles places you in an over the shoulder view. Once you have selected a unit you use this view to control them with the analogue sticks like you would a shooter.

Bolstering this nuanced control method, the game also has a strong Japanese art and story telling style. The entire experience is rendered on a painted canvass - and moves easily from cut scene to live action.

Pacing, difficulty and tutorials are each handled well so that there is a genuine growing interest in the plot, alongside an unfolding of the control systems and level of enemies encountered. The level based nature of strategy role play games means that to fail a particular stage you have to go back and try again. This repetition can make some players balk.

The strategy part of the game certainly out weighs the role playing, and as such is reflected in an excellent multiplayer mode. Here the game's narratological pretensions are stripped away to leave the strategy engine to stand on its own merits. Valkyrie Chronicles certainly provides enough variety and tight control to make these encounters just as compelling as the main campaign

Players have been attracted to the combination of warfare tactics and squad building role play since the days of Laser Squad on the ZX Spectrum (an early 80's computer that player games). In some ways the experiences you with Valkyrie Chronicles are little different. This may sounds like a negative, but in fact it is testament to the craft of the game makers who exhibit the same level of understanding about how players tick strategically.

The knife edge decision about whether to advance or retreat, to use up your precious action point, or save them for opportunities during the enemy's turn, is as thrilling as any shooter. Advancing down a field, flanked by your familiar team, moving from cover to cover ensuring the optimal chance of survival is as engaging as any pure adventure game.

Strategy games do take longer to play than most other genres. Like adventure games, this more akin to sitting down for an evening with a good book than watching an episode of your favourite soap. The time investment is greater because the experience aims to be more rewarding. Accordingly there should be a good 15 hours play here for most players to complete the single player campaign.

The game does allow you to save between each mission, although if you die in combat you have to retread your steps to the last save point - something that can mean going back through ten minutes play.

Younger players are unlikely to appreciate the strategy element of the game, although the cut scene story telling may hold some interest. Unfortunately though, it is here that we find the more violent aspect of the game. Themes such as abuse of power and individuals in a war scenario may need vetting before younger players get their hands on the game. Along side this though the story raises many interesting issues about loyalty, honour and hope that may spark beneficial conversations in a family setting.

Intermediate players will appreciate the attractive visuals and steady difficulty level. The integrated tutorials should also help newer players get used to this combination of strategy and adventuring genres.

Experts will be impressed by the level of detail and real time nature of the combat sections. While the multiple (longish) cut scenes may find derision as padding - the unusual art aesthetic is likely to please even the most adroit of strategy gamers.

You can support Andy by buying Valkyria Chronicles