Other GamePeople columnists have reviewed this from their perspective - huh?:
Family Gamer (PS3)
Tech Gamer (PS3) 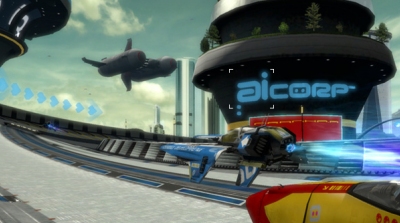 The combination of sparkling HD visuals and motion sensitive steering is a mouth watering combination to fans of the Wipeout series. But it is the little touches such as driver assist and gesture sensitivity that make the biggest difference to us family gamers.

Wipeout was first released on the PlayStation 1 in the late 90's and became famous for demonstrating how to successfully mix two youth cultures - clubbing and gaming. The hover racing game more recently game to bolster Sony's handheld lineup with Wipeout: Pure PSP and Wipeout: Pulse PSP.

Racing games, although sometimes seen as a sporting sub category, are a well established video game genre in their own right. They can feature a variety of driving styles ranging from the fantastical arcade racing focusing on thrills and spills, to the super realistic simulations that recreate every aspect of real life driving.

Wipeout is visually unique amongst racing games. Its gaming kudos enables it to draw on the top graphic designers from both the gaming and print industry. Wipeout HD on PS3 is simply stunning to look at. Although sticking to the tried and tested Blade Runner aesthetic, the sheer pace of the action coupled with an impressive replay and photo mode make this the best looking future racing game around.

Add to this the gesture controls of the Sixaxis (or DualShock 3) controller and you have an experience that is as nuanced to play as it looks. What's more, the ability to turn on driver assist to help keep the player on the track, and the to calibrate the gesture controls for small hands, turn this into a surprisingly suitable game for all the family.

If racing games are your passion, stick with it and become the best you can. Unlike some games like poker. Play casino games here, or alternativley some of the other offerings. Be the best you can be!

Under the hood Wipeout also offers a distinctive racing style. The vehicles hover around the track and have to be surfed more than driven to obtain the optimum line. Air brakes enable the player to hang the back of their craft out around corners for extra traction. Finally, you also have to manage the vertical pitch - particularly over jumps - to ensure you offer as much of the flat underside of your craft to the track surface.

Players come to Wipeout for the High Definition club inspired urban visuals and stylised racing approach. Even back on the PlayStation 1 there were some impressive vistas to behold. These are made more of in later higher resolution outings of the game that provide replay and photo capture options.

The instinctive feel of the racing is greater than ever before with the ability to both steer and pitch your craft with a twitch of the wrist. Combine this with graphics and visuals that create a futuristic subway club-racing aesthetic and it's hard not get involved in the action.

With so many solid versions of the game available you really can play it anywhere you like. Whether you grab the PSP to play on the way to work or sit down with Wipeout HD for an evening in front of the big screen at home, you should be able to get through a race in no more than five minutes.

The real investment of time is in the development of your racing skills, and here time trails come into there own. Players can invest hour upon hour trying to find the perfect line through each comer and just the right amount of air braking.

Play winning roulette that looks just as good as on the PS3 and win big with Casino Bonus's roulette tips!

The addition of the aforementioned assist mode to keep the craft from the worst of the bumps, and the gesture controls (which can be dialed right down to cope with over enthusiastic steering) create a racing game that is surprisingly easy for very young players. Like Sega Rally 360, because the player is bounced back onto the track when they veer off - gamers from three to sixty three can enjoy the fun.

Intermediate (or determined novices) will find that practice enables them to access one of the most engaging racing experience in video games. Once they have won a race or two and start to understand the basics, there are hours of racing to be had here.

Some expert racers may balk at the lack of rubber on tarmac and the complete absence of any attempt at realism. Those that are willing to go with the hovering mechanic and persevere with the gesture controls will find a game that offers a substantial challenge to even experience gamers. And with the online modes this develops into a fully fledge addiction for many.

You can support Andy by buying Wipeout HD PS3