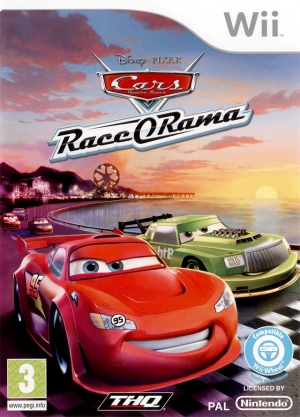 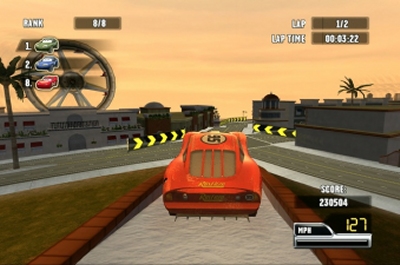 Cars Race-o-rama returns to Radiator springs and updates the game play of the original Cars games on Wii, 360 and PS3. The sequel again creates an open world that connects the different race, collect and fetch quests together into an overarching Cars story. The combination of open world and race events is not a million miles away from Burnout Paradise, Fuel or older Need for Speed games (Carbon and Undercover for example).

Cars Race-o-rama is more of the same open world event driven driving fun from the first spin-off game. Although the adults in our house are still suffering a little from Cars fatigue, our kids were obviously excited to have a fresh challenge from Pixar.

As with any movie franchise, they obviously need to maximise the use of the license. To that end Cars Race-o-rama has seen a release on pretty much every portable and home console. This Wii version does benefit from some child friendly Wii-mote tilt steering controls, and matches the others with some impressive visuals - just a slightly lower framerate.

The racing itself is arcade-y and solid. It sticks to the remit of a child friendly racing game and tries to assist with cornering and general navigation in the open world. This results in a usable but twitchy scheme that is worst when players get stuck against scenery - although in Cars Race-o-rama this is helped a little by the of fences and the like.

The main story mode of the game is accessed by exploring a pretty accurate recreation of the Radiator Springs town from the film. Different events and races are accessed by driving to appropriate locations on the map. As you work your way through each course you slowly unlock other courses and mini games. Some of the courses do look pretty similar, but the 30 or so mini games turn out to be a great little addition to the game and provide a bit more value.

Young players will enjoy returning to their favourite Cars characters and the new storyline. Although it is more of the same, this is no bad thing because of the obvious investment in quality and game play from THQ and Pixar. Those that haven't played these Cars games before will enjoy the easy controls and clear progression - provided they are now looking for too much of a challenge..

Cars Race-o-rama lets you save and quit via the man world, this means you need to complete a particular race if you want to stop without saving. As these events rarely last longer than ten minutes this should not cause a problem. The game as a whole should take an average player a good twenty hours to complete.

Novices (Toddlers and Juniors): Although Toddlers may struggle with the collecting and navigation, Juniors and Novice players are well placed to get a lot of fun from Cars. The easy controls and clear objectives, not to mention the Pixar cartoon visuals, make it a great package.

Intermediates (Parents and Seniors): Older and more experienced gamers may find the presentation and twitchy driving a little off putting at first, but beyond this is a compelling collect, race and exploration experience.

Experts (Students and Workers): The simplicity of Cars Race-o-rama next to more involved games such as Burnout Paradise and Fuel make it too much of a child focused experience for expert players.

You can support Andy by buying Cars Race-o-rama