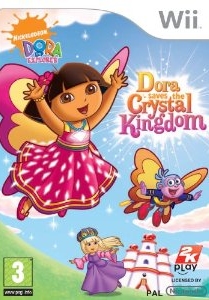 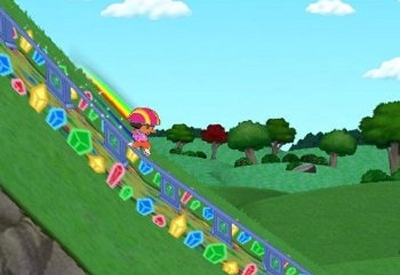 Dora the Explorer: Dora Saves the Crystal Kingdom continues 2K's tradition of excellently balance platform games for kids. Like previous Dora and Diego games on the Nintendo Wii it delivers super easy controls, and plenty of excitement, all in a genuine platform game experience that's wrapped up with great child voice acting.

Platform games task you with getting from point A to point B. The world you journey through is usually based on different levels, and populated with enemies, switches and lifts to be negotiated. As you work through each level you pick up various collectibles that accrue score, special abilities and access to hidden areas.

Dora Saves the Crystal Kingdom is unique because of its controls. It makes the excellent choice to ditch the usual D-Pad left/right and instead opt for holding the Wii-mote sideways and tilting. This not only reduces the number of buttons but also seems to be a scheme that is instantly understandable by children.

The Crystal Kingdom game offers the same features as other DOra Wii games, but here you have the task of colouring in the world as you progress. This is not just a gimmick but gives younger players a real sense of progress.

At various stages through the platforming levels the game introduces some movement based minigames. Here the player has to perform a particular action to progress. Again some intelligent decisions have been made about the controls. The fiddly Wii-mote pointing mechanic has been completely ignored. Instead, they have employed a range of gestures and motions. The result is a varied experience with child friendly controls.

The icing on the cake is the ability for an adult to pick up a second Wii-mote and assist with the minigames. This also works well if a younger sibling wants to join in the action. The two layers then work together to complete each task, with the original player controlling the platform running, jump, sliding and tunnelling.

The game is well signposted. It makes clear to all watching what the task in hand is and the various way points that need to be achieved. A bit of repetition and getting players to pick their next target (such as the Broken Bridge or Ice Slide) means that when they get their the excitement is palpable.

Young players will be attracted to the game because of the Dora the Explorer franchise. Happily though, there is plenty of substance to the game as well. Players are soon involved in the plot and egging each other on as they progress through the various platforms and return the Crystal Kingdom to full colour. The game cleverly introduces a wide variety of encounters, be they caves, holes, ladders, trapezes or unicorn rides. Each one presents a simple dilemma and a different experience before the platforming can continue.

The variety of the levels, and the quality of each encounter create an experience that is a genuinely magical extension to the television program. Something that works regardless of the familiarity with said show.

As with other platform games, it is made up of levels. You can save at any point, although you may loose a little progress if you do this between check points. Sessions can last anywhere between thirty minutes and an hour or two.

The game is shorter than more grownup titles though. Most youngsters should get through it in around five hours. the style of game and variety of items to collect does mean that it can be played through a few times without becoming overly competitive.

Young players a exceptionally well served by this game. The characters, franchise, graphics, sounds and controls all work together to provide an experience tailored to them. The usual awkward elements, such as timed jumps, the fear of the character dying and the fiddly Wii-mote pointing have all been left behind to leave a slipstreamed game.

Intermediate parents and siblings can have a lot of fun here playing with younger family members. The ability to grab a second controller and help them progress is a nice touch, but just as much fun is the various bits of advice and questions that the game throws up.

Expert gamers are not the target audience here, and really need a young friend to see why this game is worth its entry price. They will be better served by more hardcore adventures such as Zelda: The Twighlight Princess Wii.

You can support Andy by buying Dora Saves the Crystal Kingdom