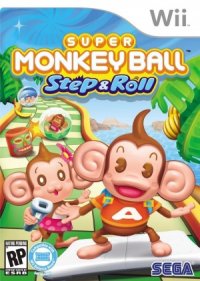 Monkey Ball Step and Roll brings pure tilt-table fun back to the Wii. Rather than jump and boss novelties of Monkey Ball Banana Blitz, Step and Roll focuses on improving the controls and offering a quality experience. It's good to see this game that started as a Nintendo exclusive returning in style.

Third person games view the world from over the right shoulder of the character being controlled. This enables you to see the character you are controlling as well as their surrounds. Although not as immersive as first person, third person games enable more complex moves and interactions with the environment.

Assistance multiplayer games provide a cooperative experience where players of different abilities can collaborate. Some examples, such as Mario Galaxy or Modern Warfare Reflex on the Wii, enable a more experienced player to jump in and help the less experienced. This also works in reverse, where the expert player controls the main flow of the game and the novice plays a supporting role, such as in Viva Pinata on the 360, something that make these games ideal for families.

Monkey Ball Step and Roll is ther first Monkey Ball game to support the Wii's Balance Board. It is also the first time the franchise has been updated on Nintendo's console since the launch title Banana Blitz.

Whereas the original Wii game was criticsed for the vauge Wii-mote controls, Step and Roll offers a much more positive experience. While the Balance Board control takes a while to get used to, both that and the Wii-mote give the sense that you really are tilting the environment to get the Monkey where you want him/her.

A big feature of Monkey Ball games is always the Minigames. These offer various copmetitive scenarios that range from flying, shooting, racing, sporting and platforming. They not only extend the life of the main game, but often offer families a number of alternative ways to play together. Step and Roll offers a strong set of these minigames, although they don't feel quite as fleshed out as those on the Gamecube Monkey Ball 1, 2 and Deluxe games.

The biggest addition in Monkey Ball Step and Roll in the co-op play. Here, one player controls the tiling movement while the other is equiped with a gun to clear a path. Although not a true co-operative campain - more of a sub-game - this is still an entertaining way for friends and families to play together.

The Monkey Ball brand will attract many games, but it is often the range of minigames that keep them entertained. Watching family, student or freindship groups play through the multiplayer games is entertaining. Both competitive and moorish, although a minor aspect of the experience, games like Monkey Flying where you have to glide your way to a target, create real competition and entertainment.

Each of the levels takes no more than 5 minutes, so players can stop and save at any point. The minigames are where you will find the need for just one more go, and are a lot harder to put down - and to get the kids off when it's tea time.

Intermediates (Parents and Seniors): The nuanced controls are easy to pick up by those with a little more dexterity. Mums, Dads and Grandparents will find a challenge in the main game, as well as plenty of enjoyment with the minor minigames.

Experts (Students and Workers): Although still not quite as pure an experience as the Gamecube's analogue stick controls, the Wii-mote tilting will provide a real challenge to experts who look to get a perfect on each level. Once aclimatised to the limitations of the controller, players will enjoy the task in hand - although some may wonder why there is not MotionPlus support that would have offered extra fideltiy.

You can support Andy by buying Monkey Ball Step and Roll