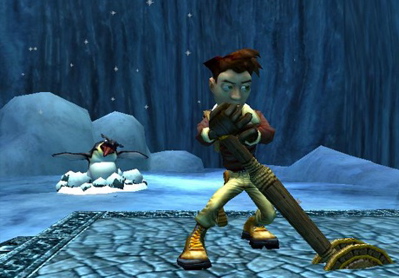 Pitfall The Big Adventure is another game in Activision's Fun4All series. Although packaged in a similar fashion, these games fluctuate in their best audience. Here we have a game that provides a genuine adventure experience rather than a simple set of minigames like Block Party Wii or World Championship Sports Wii.

Adventure games are enjoyed for two reasons: they provide enemy encounters that require tactics and strategy to conquer, and they create a fantasy world in which to explore and adventure.

Pitfall The Big Adventure provides an open jungle environment for the player to explore. As they go they need to jump crocodile pits, man eating plants. At certain points they need to collect items to get further - a raft to negotiate a raging river or dynamite to open up a rock covered path.

The game is controlled mainly with the Nun-chuck's Analogue stick for movement with other buttons and gestures providing the jumping and hitting. Like the original game around which it is themed, Pitfall The Big Adventure relies on tight timing of jumps and a little hand to hand combat.

As the player progresses a story unfolds and they realise there is a lot of ground to cover. The cartoon visuals and sound effects are well used to create a sense of peril and suspense. What looked at first to be a miniature platform experience becomes an pretty strong ongoing adventure on the Wii.

As the player progresses a story unfolds and they realise there is a lot of ground to cover. The cartoon visuals and sound effects are well used to create a sense of peril and suspense. What looked at first to be a miniature platform experience becomes an pretty strong ongoing adventure on the Wii.

Because this is a genuine ongoing adventure, this is a game in the Fun4All series that will last a lot longer. both individual sessions and the game as a whole has more original content to offer than it's minigame counterparts.

Young players may find some of the man eating peril a little unsettling, and certainly some of the complex double jumps may well be beyond them.

Intermediates with a few more years and experience will find this can be an engaging game. Even here though there are often points at which players may get stuck if they are not determined to succeed. Ladders back out of some rooms can only be accessed by pinpoint accurate jumps, and often it is not clear how to proceed.

Although experts are perhaps best placed to get through this game they will most likely balk at the childish presentation. For them the likes of Uncharted Drakes Fortune PS3 will be more their cup of tea. But this is missing out on what can be an enjoyable little game on the Wii, and just the sort of original experience the system is criticised for lacking.

You can support Andy by buying Pitfall The Big Adventure