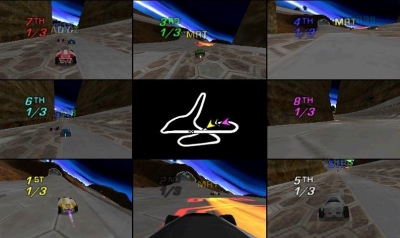 Archer Maclean's Wheelspin takes the radio controlled racing genre to the limits on the Nintendo Wii. It creates a racing environment with a real sense of connection between the player and the race. The tidy addictive gameplay from Archer Maclean's previous successes - Dropzone, IK+, and Jimmy White's Whirlwind Snooker and Mercury Meltdown - continue to be his call sign. This is one of those rare grown-up Nintendo Wii games, built specifically for the console.

The headline feature for Wheelspin on the Nintendo Wii (Speed Zone in the States) is the number of people that can play together simultaneously. Using a combination of Wii-mote, Nun-chuck, Classic and Gamecube controllers up to 8 players can play at the same time. The screen is split into nine, with one segment for each player and the centre used for the map.

Although it sounds like this would make the game difficult to play, it's a scheme that works well provided you have a big enough screen and can sit close enough. You can use one Wii-mote for one player and connect a Nun-chuck for a second player. This means you can play with up to eight people using just four Wii-motes and four Nun-chucks.

The racing itself is of a simulation style, although the feel is more towards the Remote Control (rather than full size) driving experience. This fits in well with the fun aesthetic of the rest of the game. This sense is reflected in the battery powered nature of the cars - something you need to keep an eye on when you are racing to ensure you don't run out of charge.

The multiplayer mode provides a set of tracks to get you started that is expanded upon as you progress in the single player. This progress is through winning races as well as setting records and achieving particular goals.

Although it may be the multiplayer credentials and Archer Maclean's track record that is likely to attract players, the gameplay itself is the real reason to buy Wheelspin (Speed Zone in the States). By focusing on a simple race environment and simulating the physics of each car on the track Archer Maclean has created a race experience that is both intuitive and nuanced.

Watching eight people all battle it out, wrestling to squeeze every last ounce of speed from their cars and the track shows how much there is to learn about Wheelspin. Frustration soon turns to concentration as players realise they need to apply accurate and timely control to make it round the track in one piece.

Each race takes around five minutes and can be saved straight after. Players will want to chain some of these together to progress and unlock new cars, weapons and tracks. The multiplayer game by its nature is more competitive. Get a keen group together and you can easily while away a whole evening.

Very young or novice players will find the old style gameplay a little hard to handle. It's easy to fly off the track Scalectrix style, and this makes it hard for very young drivers to keep up - even with the simple tile control of the Wii-mote. My four year old son, is quite good at playing Wheelspin, he manages to complete races and win new tracks, even though he quite often falls off. Even so, I can tell he's not getting the most out of the game.

Those a little older and intermediates players who are willing to put in a bit of practice will get more out of Wheelspin and start to understand how you need to drive to go faster - using the hills, racing lines and so on.

Expert players and those that have enjoyed Archer's 8-bit and 16-bit creations will be right at home with Wheelspin (Speed Zone in the States) on the Wii. Stunt Car Racer seems to have been a reference point here, along with the general low-visual approach that the Amiga was made famous for. The combination of easy accessibility and hard-core racing is a real rarity in gaming, particularly on the Nintendo Wii.

You can support Andy by buying Wheelspin