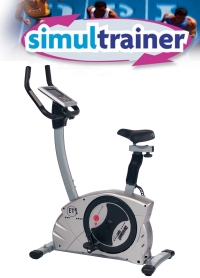 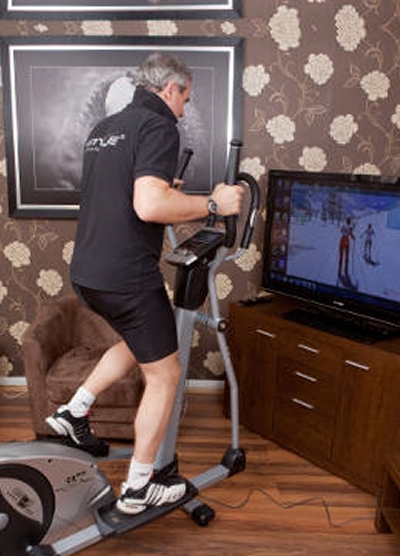 Simultrainer is an exercise system that works with a range of professional gym gear. While it's not cheap, the build quality and fundamental changes it brings to exedrcising are well worth it. And compared to a year's gym membership it's actually pretty good value.

Lets face it, gyms are boring and expensive. It can be hard to stay motivated sitting on a bike or running on a treadmill for extended periods. I'm convinced this is the major reason for the boom in home fitness products such as Wii Fit - they make getting fitter and looking after your health fun and convenient so people are more likely to stick with them.

However there is a limit to how much of a workout you can get bouncing around on a Wii Fit balance board, if you really need to burn those calories it's hard to beat a bit of proper gym equipment.

InStyle Fitness have taken an interesting approach with their Simultrainer range. Rather then build their own equipment they've worked with equipment manufacturers to develop a system that is compatible with a wide range of static bikes (upright and recumbent), cross-trainers, rowing machines and treadmills, all designed for real gyms. They also offer a small selection of equipment for sale direct to the public, so if you have the cash and space for a gym you can have a professional quality bit of kit in your own home.

I have been using the ET6 upright static bike. This is actually built by Christopeit Sport, who make professional gear for gyms, so it is very well built but comes with a price tag to match. The bike and Netathalon software will set you back Ł550, and you will also need a PC and screen to run the software on.

While this is clearly not for the budget user, you do get what you pay for. This is a fully featured gym grade bike with excellent build quality and features, unlike the low-cost but disappointing Cyberbike which was let down by its hardware.

Setup was simple, you just run a USB cable from the front of the bike to a Windows PC. Netathalon just requires a basic Windows PC, so you can setup your system however you like to suit your home and pocket: you could use a projector or TV or just use a suitably positioned monitor, it's up to you.

The software is also easy to use, although you can spend a while fiddling with all the options. Once you've set up your profile you select from different locations to race, mostly real places such as olympic race courses or scenic Alpine road stages, but you can even race on the moon!

The graphics are good, providing a pleasant backdrop to your cycle, and the display is clear with lots of information about your progress and a useful cross-section of the route. The race system is straightforward, the harder you pedal the faster you go, while the bike resistance matches the incline of the course at that point. The software even simulates the effect of getting into another rider's slipstream, giving you a boost and making for more tactical racing. The bike has a dial on it which controls the "gears" of the bike, so you can adjust to the terrain you are on just as you would on a real bike.

What really makes the Simultrainer system great is the competition that it brings to a normally solitary activity.

Pretty scenery is nice, but what really makes the Simultrainer system great is the competition that it brings to a normally solitary activity. You can compete against both computer "pacers" and up to 15 other real people. The simplest pacers cycle at a constant pace, but smarter ones will change based on your performance so that you always have some competition.

If you want to race against yourself you can also create opponents based on your own past performance which is a great way to stay motivated. In a gym with lots of bikes, or if your system is online, you can race other people around the circuits, and even talk to each other over the internet while racing if you have a headset. This is great if you have friends with compatible gear who you can race against.

Even with just computer pacers, the element of competition, together with the immersive scenery really helps make things more fun. I was surprised how much harder I worked just trying to keep up with the pacers than I would have normally, and how much easier it was to keep going when I have an incentive, even just a virtual one.

I'm certain it will get a lot more use than most home exercise gear does, and compared to a year's gym membership it's actually pretty good value.

While the Simultrainer system is not for the budget conscious, the compatible hardware is all very high quality, and the software is excellent. The end result is a system that combines the best of professional gym equipment with a twist that makes a fundamentally dull activity immensely more enjoyable and motivating.

At Ł550 for the cheapest option (before you add a screen and PC) most people will only get to use it in a gym, but you'll be far more likely to keep going back if you do. If you do buy one for home use I'm certain it will get a lot more use than most home exercise gear does, and compared to a year's gym membership it's actually pretty good value.


You can support Luke by buying Simultrainer