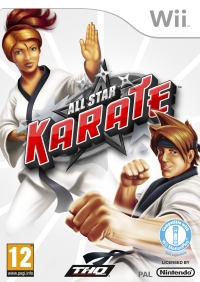 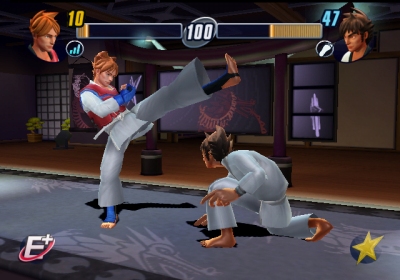 All Star Karate offers some genuinely active game play that will contribute to a fitter lifestyle. But not only that, the tongue in cheek visuals, well measure controls and MotionPlus support make this a solid release for fitness and general gamers alike.

If you are child of the 80's like me, the word Karate probably conjures up two images: The Karate Kid (which they have remade this year) and the Street Fighter series. Playing All Star Karate I can't help thinking that the developers must be from the same era.

It took me a few moments to realise that the cheesy animation and storyline of the first cut scene was clearly intentional. The artwork is pure Street Fighter - stilted manga-ish animation, spiky hair and bright colours with comic-book speech bubbles and a cheesy voice-over.

And the story - young chap meets wise old man, wise old man teaches young chap Karate, young chap beats up ninjas and learns about life in the process - is pure Hollywood. This is a ripe Stilton of ironic cheesy-ness, and I mean that entirely as a complement.

Of course, ironic 80's references don't matter if the game is no good. Thankfully it doesn't disappoint. Coming from the same devs that gave us All Star Cheerleader, this is clearly an attempt to bring the same basic formula to boys.

The meat of the game is the Story Mode, in which you progress through various sessions of training and challenges which get progressively harder and more complex, interspersed with a story involving a sensei who looks like a fat Mr. Miyagii in a Hawaiian shirt, and a gang of your disbelieving friends. While the cut scenes may be self-consciously silly, the in-game animation is pretty good for the Wii while managing to keep the styling with bright colours and smooth animation.

Training consists of working through Kata, sequences of karate moves performed with the Wii-mote and Nun-chuck.

Training consists of working through Kata, sequences of karate moves performed with the Wii-mote and Nun-chuck - never has that name been more appropriate. Each move is indicated on the screen with an icon which promptly gets punched or kicked when you get it right.

That's easier said than done if, like me and the majority of other people working out, you don't listen to the instructions properly. Each icon has a circle that changes colour and you are supposed to make your move when it goes green, something I would have known if I'd paid attention to the instructions.

So if nothing else I learnt something about patience and listening to my teacher, which seems appropriate given the nature of the game. Once I'd twigged what I was doing wrong my marks improved significantly and I started to progress somewhat faster. That meant it was time to start fighting...

The fight system works well, and includes that all-important feature of The Special Move Combo.

You start off sparring against your teacher, but later on get to take on ninjas - which exist in your character's dreams and are attired with suitably fun costumes.

The fight system works well, and includes that all-important feature of The Special Move Combo. However out go RSI inducing button press combinations and in comes flailing around like a lunatic trying to complete sequences of moves that pop up on screen.

I'm as rubbish at these as I was at special moves in the old Street Fighter days, but that says more about my current reaction speeds and coordination skill than it does about the game. Successful strikes are accompanied by suitable sound effects comic-book style animation that fits right in with the rest of the game. Once you've got the hang of things you can also take on a friend in the multi-player mode for some old-school fight-game action.

Like All Star Cheerleader it is a genuinely active Wii game that will get them and you out of your seat and moving around.

If you have the Motion+ add-on for your Wii then you will also get some bonus games in which you use your Bokken - a wooden sword - to swat ninjas and throwing stars as they try to attack you. It works nicely, a bit like the Kendo in Wii Sports Resort, with the Bokken matching your movements very well.

Now, All Star Karate is clearly not intended as a fitness game - although it might encourage a few kids to take up Karate as I'm sure Street Fighter did - but like All Star Cheerleader it is a genuinely active Wii game that will get them and you out of your seat and moving around.

When you get into it there's a good chance you'll work up a sweat. While you won't be ditching the gym for All Star Karate it certainly beats twiddling your thumbs. Like the boxing and sword fighting games in Wii Sports Resort, All Star Karate is a surprisingly active game that might not replace your gym membership or your copy of Wii Fit, but it is a great game for a bit of active fun at home.

With it's tongue clearly in its cheek this is great fun for both kids and nostalgic "grownups".

When I first started playing I was worried that this would be a slightly lame attempt at making All Star Cheerleader cooler for boys by dressing it up as karate, but I was wrong. This is an excellent update to the one of the classic game genres which makes good use of the Wii to add something new to the concept. With it's tongue clearly in its cheek this is great fun for both kids and nostalgic "grownups".


You can support Luke by buying All Star Karate