Other GamePeople columnists have reviewed this from their perspective - huh?:
Odyssey Gamer (360) 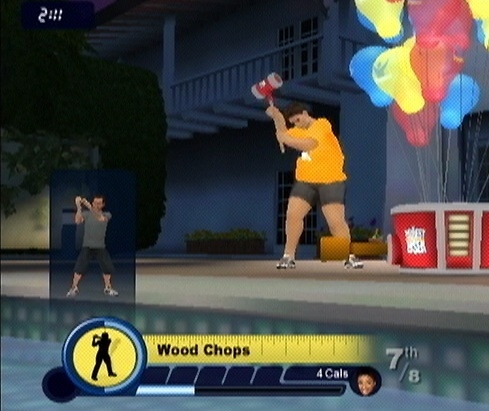 The Biggest Loser is the second Nintendo Wii game spin-off from the TV Show. After the unconvincing Jillian Michael's Fitness Ultimatum, Biggest Loser Wii has clearly had the active involvement of Bob Harper, the other trainer from the show, and is a good attempt at bringing the its message and ethos into your home. To give it a fair review I've been using as my main fitness game for over a while now.

The first Nintendo Wii game linked to the hit TV show, The Biggest Loser, which follows a bunch of overweight people trying to shed the pounds, was Jillian Michael's Fitness Ultimatum. Fitness Ultimatum was a poorly executed exercise game featuring one of the instructors from the show. It was the perfect example of the tie-in, they slapped a famous name on an otherwise sub-par game and expected it to sell.

While Wii-Fit focused on games of strength, balance and coordination, the rest of the exercise game genre has taken a more conventional route, with designers concentrating on traditional forms of exercise that focus on calorie burn and aerobic workouts. The result has been essentially interactive versions of fitness videos.

Biggest Loser Wii is clearly in this camp, with everything taking place in a virtual gym, and workouts consisting of the kinds of floor exercises that you would find in any fitness class or video.

During these workouts you use the just the WiiMote, and Wii-Fit Balance Board if you have one, to provide feedback. Keeping it simple reduces the amount of faff between exercises to a minimum, letting you get on with your routine. The routines are well structured and varied, with lots of different exercises, and optional warm-up and cool-down routines, which I would recommend. There are a various levels of intensity to choose from and you can specify a length to fit the time available. Unless you pick the toughest levels the calorie burn from the routines is a little disappointing, averaging about 150-200 calories an hour, which is not as good as EA Sports Active on the Wii, and more inline with the average Wii-Fit routine.

This is not just an exercise system, it is an attempt to include all the lifestyle advice from the show one place.

Rather than give you your own avatar, Biggest Loser lets you choose one of the contestants from the programme to represent you, who loses weight as you progress. This is slightly odd, especially as most people will be somewhat smaller than the contestants. In addition, the camera angles mean that for most of your exercise you are looking at the instructor, so overall I'm not quite sure what the point was, although it did make me think, "well, if he can do it...".

The routines form part of a programme which includes a lot of extra material, including recipes for healthy meals, a calorie counting system, and a calorie calculator which works out how many you should be eating. This is not just an exercise system, it is an attempt to include all the lifestyle advice from the show one place. It emphasises that if you want to lose weight, exercise is not enough, you need to make changes to your lifestyle. All this advice takes the form of videos from Bob, and tips from former contestants of the show. It's all positive, upbeat, and "can-do" stuff, which is a nice change from some of the more hectoring games out there, including Wii-Fit. It tries to recreate the show with regular weigh-ins, scheduled routines, daily "challenges" and the like, all tied together by Bob's cheery encouragement.

All this makes The Biggest Loser one of the better games available if weight-loss is your main focus, aiming to provide everything you need for your diet, exercise and lifestyle.

All this makes The Biggest Loser one of the better games available if weight-loss is your main focus, aiming to provide everything you need for your diet, exercise and lifestyle. While it gets top marks for the concept, and for trying to produce something with real depth and content, it loses a lot for a distinct lack of polish.

The interface is a bit of a mess, making it less than smooth to use and the in-routine audio is buggy, often playing the same message repeatedly, or not playing any music for ten to twenty seconds. The instructor voice (especially Jillian Michael's) sounds like it was put together rather half-heartedly - maybe she was hoping you'd buy her game instead! There are annoying gaps in the audio instructions, especially noticeable when you are looking away from the screen, as in some yoga poses, suggesting a distinct lack of user testing.

The Biggest Loser on Nintendo Wii may lack the polish and exercise intensity to put it alongside EA Sports Active, but the concept is good. With better execution this could have been one of the best games for those whose main aim is to lose weight. If you are a fan, and don't mind the lack of polish, this could be just the purchase to help lose those pounds.


You can support Luke by buying The Biggest Loser