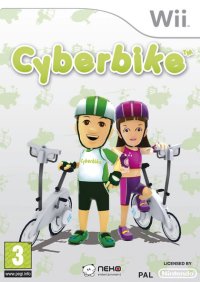 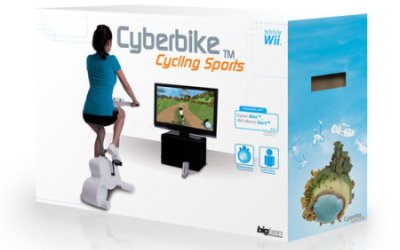 Cyberbike Wii comes with a full size well built exercise bike and is surprisingly well polished. If the bike was a little harder to pedal this would be a great fitness option, as it stands though it is simply a lot of fun.

The idea of the Cyberbike is pretty simple and not entirely new. Back when I was a kid I remember watching an episode of Tomorrow's World where they showed an exercise bike hooked up to a simulator and a big screen. What is new is that you can now have that in your own home at a sensible price, with the added benefit that you can actually play games with it and not just cycle around simulated worlds.

The Cyberbike is a cheap exercise bike (GBP99, compared to GBP200 for a traditional static bike), which plugs into the GameCube ports on the Wii. For those that don't know about these ports, probably most of us, just pop open the flap on the top of the Wii and you'll find four Gamecube circular ports you can plug into.

Once plugged in you can play the supplied games by peddling on the bike to go forward and back, brake, and steer with the handlebars. You can also play the games with the Wii Remote or a GameCube controller, but that means pressing buttons very rapidly to peddle, which hardly counts as a workout in most people's eyes and just gave me thumb cramps when I tried.

The games themselves are simple and surprisingly fun. You either ride a bike or drive a pedal-powered submarine, helicopter or mine cart, and have to complete some simple tasks - such as collecting all the rubbish from the road or floating in the air.

All the games have an ecological theme, but it's not overwhelmingly preachy, and it seems appropriate for a cycling game. You can play on your own, or with up-to three other people. So if you were feeling flush and have a bigger house than me you could buy several bikes and compete against the family.

The concept is great, the software is fun and very nicely put-together, and generally the bike is well built and great value for money.

I was surprised at how good the production values on the games were, with high quality graphics and nice design work, especially in the rather nice flying and underwater games. I could have happily spent hours peddling away under the sea, it certainly beats staring at TV in the gym. While the games won't win any awards, they are fun enough to make peddling away much more enjoyable, with an element of competition to keep you going. However it would be nice to have a few more games as I'm sure the four supplied are going to get dull after a while.

Of course, the most important aspect of Cyberbike is the bike itself. On the whole it is well put-together and solidly built. However it's smaller than other static bikes I recommend which caused me a few problems. When cycling, your legs should be fully extended on the down-stroke. At 5' 11" I am too tall to do that on the Cyberbike so my legs are bent all the time, which is less than ideal. I also found the seat rather too firm - something I fixed with a small cushion.

However, the most disappointing aspect of the bike is also the most important, it simply has no significant resistance. Even when set to its strongest setting there is no real effort involved in peddling. This is such a disappointment, the bike is well built, and the games are fun, but it requires so little effort that it hardly seems worth it.

If they fix the issue with the bike's resistance to make it a better workout Cyberbike would be a brilliant home exercise system.

Thinking that it might just be mine, I checked out a lot of customer reviews and I don't appear to be the only one with this problem. The lack of resistance meant I got a disappointing workout, burning no more calories than if I'd gone for a leisurely stroll despite peddling quickly. The game itself displays an estimated number of calories burnt, but this was wildly optimistic (by a factor of 5) compared with the result given by my pulse-meter, which I trust to give me reasonably accurate calorie data.

The Cyberbike should be brilliant. The concept is great, the software is fun and very nicely put-together, and generally the bike is well built and great value for money, but all this is no good if using it doesn't actually require much effort.

As it is the Cyberbike works very well as a controller but as a piece of exercise equipment it is disappointing. If they fix the issue with the bike's resistance to make it a better workout Cyberbike would be a brilliant home exercise system, but until then you are probably better off sticking to the Wii Fit Plus cycling game, which has the added advantage of taking up a lot less space.


You can support Luke by buying Cyberbike