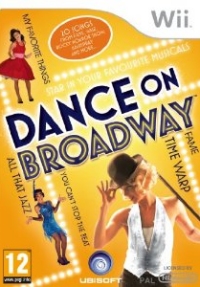 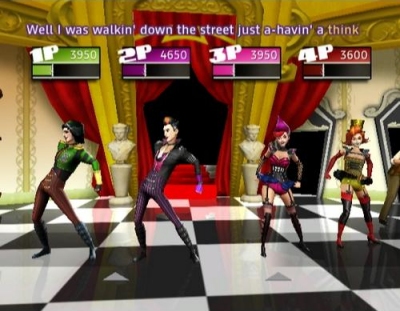 Dance on Broadway Wii is a rather limited Wii party game that doesn't provide enough reward to make you play it more and was unconvincing in terms of fitness potential.

A lot of Wii promotion centres on how it's a sneaky way to get exercise through motion-controlled gaming. Being the sort of person who bunked off PE at school, such 'hidden' exercise is appealing.

Dance on Broadway is, as you might guess, a dance game. You select a routine from a show, then perform it by mirroring onscreen dancers. Up to four players can dance at once, and are scored on how often they match the moves.

The control is very basic, purely based on the position of the Wii-mote. There's no use of the Nun-chuck to check your other hand is moving, or a Balance Board or Dancemat to capture your smoking steps.

The Wii-mote is rather too limited in scope to really record what you're doing: an identical move can be scored as a miss or a 'great' for no clear reason.

I'd often end up completely out of sync but still scoring 'great's. So according to the game, I could be in a chorus line for a sharp Bob Fosse number.

Guide icons at the bottom are meant to indicate what move is coming up, but these are hard to interpret, and bear minimal relation to the moves the dancer performs. Without helpful prompts, you need to have played through a number a few times in order to stand a chance of getting a decent score. As a party game, that leaves anyone who hasn't played it at a disadvantage.

According to the game, I could be in a chorus line for a sharp Bob Fosse number.

There's also no way of recording your scores. The player who gets the highest score is indicated, and the high score is shown on the selection screen, but it's not tied to a player. So even as a party game you're limited to merely scoring the highest from whoever you play with.

There are only 20 numbers, and there are no additional ones to unlock to reward keen dancers. The choice seems a bit random, suggesting in part they were picked as they had similar moves to one another. And don't think you can do well on 'The Timewarp' if you only know the student nightclub version.

It's not going to turn you into a Broadway hoofer.

In terms of getting sneakily fit, Dance on Broadway is purely an aerobic game. The speed of some numbers, such as 'You Can't Stop the Beat', leaves you breathless but that's about it.

It's fun, especially watching someone else doing it, but it's not going to turn you into a Broadway hoofer.


You can support Luke by buying Dance on Broadway