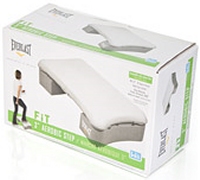 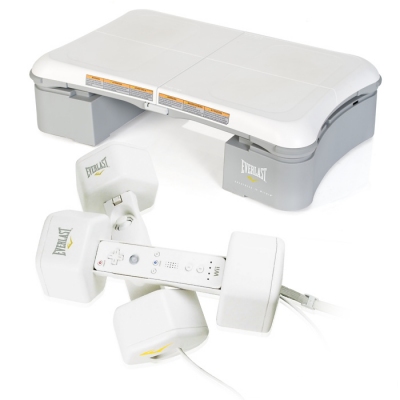 Everlast Wii Fit workout accessories create a workout much closer to the gym. Although the weights were a little fiddly to use, both them and the balance board platform made for a much more challenging work out.

Because of its very physical control system the Wii has always attracted a lot of third party accessories, from tennis rackets to golf clubs. Most of these have been largely pointless, just plastic shells for your controllers. With the release of Wii-Fit and other fitness games we have seen more useful accessories arrive to help you make your workout more effective.

Two of the most popular kinds of accessory are weights for your Wii-motes and platforms to raise your Wii-Fit balance board. Here, fitness equipment manufacturer Everlast has released their own Wii weights and balance board platform.

One of the big problems with the Wii-Fit balance board has always been that it is a compromise. In order for it to be useful for strength, balance and yoga exercises it is just two inches high which means it's pretty useless as a step in Wii-Fit or EA Sport Active's step aerobics routines.

Over the course of a routine that extra inch will have an impact, making you work that little bit harder.

Everlast's balance board platform (provided by Firebox) is a sturdy set of blocks that aims to remedy this. Once assembled (just four small screws) it adds three inches to the height of your board, bringing it to a total of five inches. This may not sound much to the uninitiated, but it significantly increases the amount of work you do.

In the past I've stopped using Wii-Fit's step routines as they require so little effort that you are lucky to work up a sweat at all, but with the Everlast platform it actually feels like exercise again. I built up a proper sweat and, according to my pulse meter, the number of calories burnt had been significantly increased.

The platform is very solidly built despite being lightweight plastic, with good rubber feet, and snugly fitting holes in the top for the balance board feet, all of which mean it stays firmly in place while in use. Essential if you are going to be jumping on and off it. At three inches tall it is also the highest platform that I have come across, about an inch taller than it's main competition, the Riiser.

When it comes to step platforms size matters, one inch can make all the difference. Over the course of a routine that extra inch will have an impact, making you work that little bit harder. There is one downside to the study design, it doesn't fold away like the Riiser, but that is unlikely to be a serious problem unless you are really stuck for space.

The effect on a number of the muscle exercises and even on the Wii-Fit Jogging game is significant.

Like the step platform, Everlast's Wii Weights (provided by Firebox) are designed to make your workouts more meaningful by increasing your effort. Each weight adds about a kilo to your Wii-mote and Nun-chuck, which will significantly increase the amount of work you have to do while doing upper body exercises with the controllers.

The controllers fit snugly into the spaces in the handles of the weights, and you can still easily get to the buttons on your controllers which is essential. However, unlike the Wii-Fit Balance board step platform, where bigger is always better, the size of these weight quickly became annoying.

The weighted sections themselves are noticeably bulkier than the 1kg sets for my ordinary weights, or other Wii weights on the market, which makes them a little unwieldy. It is also impossible to connect or disconnect the Nun-chuck from the Wii-mote once the latter is in place, you have to pop it out in order to get to the plug. This quickly gets irritating as a number of the exercises in Wii-Fit only use one controller.

Other than that though, they do what they say on the tin and are well made - if a bit plasticy. The effect on a number of the muscle exercises and even on the Wii-Fit Jogging game, in which you run with the controllers in your hand, is significant.

You should very careful if you use them with games like Wii-Fit Boxing or Kung Fu as you may risk over-extending and damaging your elbows as you try to stop the momentum of the weights. This can be a problem for people when they are just using the controllers, so you should be extra controlled if you choose to use the weights, being careful not to let your arms go to full extension.

If you've had your Wii-Fit or other fitness games for a while and have started to feel that there is not much challenge left in them, investing in a step platform and weight like these from Everlast will certainly improve your workout, increasing your calorie burn rate and pushing your muscles a little further. Both of these items are simple but sturdy bits of kit that can make a surprising difference.


You can support Luke by buying Everlast Weights and Platform