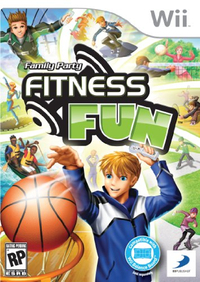 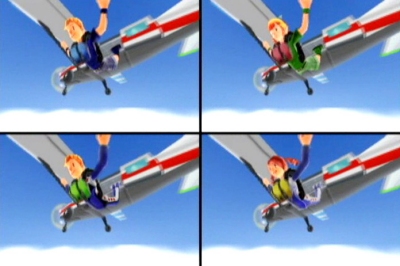 While many of the fitness games available for the Wii try to inject fun into all that exercise, they are not exactly designed for the family, or for kids generally. There are of course many active games that are great for kids, like the Dance Dance Revolution series but none that are explicitly about fitness. Many of the fitness games have limited multiplayer modes, but none are really about exercising as a group or a family.

So I was curious to see how Family Party: Fitness Fun would try to fill this gap in the market, and if it could make fitness gaming something for all the family to enjoy together.

Like most of these minigame collections, it's all a bit hit-and-miss.

Like most of these minigame collections, it's all a bit hit-and-miss - and with pretty low production values. Some of the games, such as the ball rolling game, are quite entertaining, while others seem to be utterly devoid of any interest at all.

The problem is compounded by frequently illogical and over-sensitive controls. The instructions, despite being wordy, frequently miss out important aspects like how to actually control your character. The end result is confusion and frustration all round.

This is partly addressed by a tutorial mode but even this is vague. Even with my background we ended up having to play every mini-game twice - once to learn the rules and once to actually play.

The most striking thing you notice playing Fitness Fun is just how little of it is fitness related.

The most striking thing is how little of it is fitness related. I know that this is designed for families, and therefore for kids, so this isn't going to be hard-core exercise, but the majority of the games involved very little movement - most are played just using the Wii-mote and require little effort to play.

As anyone who's seen kids playing Dancing games (like the recent Dance Central for Kinect or Just Dance 2 on the Wii) knows, getting them up and active is not hard if you give them something fun to do. But most of these games fail that simple test, they are simply not engaging enough. The games on show here are no more active than any normal Wii game that uses the remote, and many are less active than most.

The activity level does increase if you have a Wii Fit Balance Board, but only fractionally. With the board enabled you are limited to about a dozen of the games, however they are hugely improved by using the board which makes a much better controller for many of these games than the Wii-mote. But even then it can't take away from the fact that most of them are very shallow and un-engaging.

Family Party: Fitness Fun does get some things right though. The multiplayer for instance is great. All of the games are designed from the ground up for up to four people to play at the same time. There is not much turn-taking as even when one person is the main player, the others still have something to do. A good example is a bridge crossing balance game, where the other players can try to knock you off the bridge with their cannons. This focus on multiplayer action means that it's much better for group play than many other minigame collections.

One aspect that Family Party: Fitness Fun does get right is the multiplayer aspect: all of the games are designed from the ground up for up to four people to play at the same time.

But beyond this Family Party: Fitness Fun was a real let-down. It felt like they had simply slapped together a bunch of minigames, many of which are very similar to ones you'll find elsewhere. The "Fitness Fun" aspect is almost entirely missing, and feels like nothing more than a marketing gimmick.

If you genuinely want to get the whole family playing more active games together you would be much better off with the Mario Olympics games, or the Ravin' Rabbids TV Party game which will get you up and about much more than this rather feeble collection.

There are a handful of decent games here, and the focus on true multiplayer action makes it good for family gaming. But this is simply not a fitness game.


You can support Luke by buying Family Party: Fitness Fun

FitGameForum.com wrote this Fit Gamer article under the watchful eye of Luke Pyper.