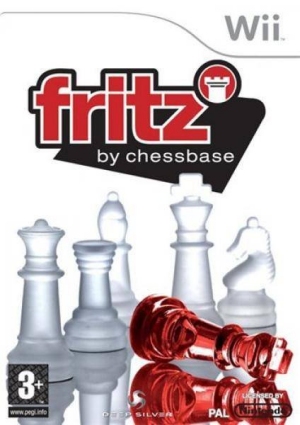 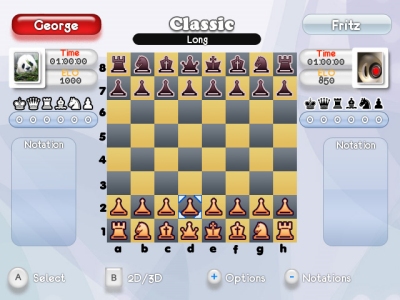 Fritz Chess for the Nintendo Wii is one of a handful of games that mirror recent fitness games with brain training - boosting your mental power with puzzles. If you are looking to work-out your grey matter, Fritz will certainly help you learn, enjoy and play chess.

While working your body is important, looking after your brain is equally so. With everyone living longer, the risk of developing dementia in later life increases. Doing puzzles and using your brain won't prevent this but is thought to slow the process down by giving you more active brain-cells to start with, which means you stay compos-mentis for longer.

Before all the purpose built brain training games came along, one of the hobbies recommended to keep your neurones firing on all cylinders was Chess. Personally I think games like Chess, rather than plodding through arithmetic puzzles and reaction tests on you DS, can be a far more enjoyable way to keep your brain active, so I was looking forward to trying our Fritz Chess for the Wii.

Fritz has been around for over a decade, and is generally considered the best computer chess program in the world, beating any number of grand-masters and assorted brain-boxes. But don't let that put you off if you are not a grand-master. While Fritz can be a fiendish opponent, the "domestic" versions are squarely aimed at beginners and amateurs, which is lucky for me as I'm rubbish. For total beginners, there is "Adventure Chess", featuring the Black King, who teaches you the rules of the game and all the basic moves, and which pits you against ten increasingly smart players from the King's castle, complete with animated cut scenes with strange characters to liven things up between games.

Perversely, one of the best features of Fritz is how well it plays bad Chess.

Perversely, one of the best features of Fritz is how well it plays bad Chess. In the past I've given up with chess programs that even on their dumbest settings couldn't help but be good. Fritz on the other hand manages to convincingly play a naive game, in the style of an amateur human player. Even a beginner stands a chance beating it, essential if you want people to keep playing, making your progression through the King's castle nice and smooth.

Once you've mastered the basics with the Black King, you can learn more advanced moves, such as castling, in the Advanced tutorial, presented by the cartoon head of dead Grand Master Bobby Fisher (a peculiar choice, given the living alternatives such as Gary Kasparov). These guides are simply text that you flick through, and lose something in translation from their original German by trying a little too hard to be wacky and enthusiastic about chess. However, you won't take long to get through them, as the basics of chess are not really that complex.

Once familiar with chess you can start playing normal games. You can choose from a wide range of opponents, from very easy, which I could beat, to grand master levels for the expert players. There is also the excellent "Friendly" mode, in which Fritz dynamically adjusts it's difficulty to match your level of play, so it gets better as you do, without ever being too good to enjoy playing against.

The chess nerds among you can tackle chess problems or replay classic matches, or work on your ELO rating

While you are still learning, Fritz's nifty help system can show you legal moves, probable threats from your opponent, and suggest moves that might be good. Bobby Fischer will also pop up and warn you of catastrophic moves you are about to make, letting you undo them. And if you fancy a change you can play Giveaway (or "Suicide Chess") in which the winner is the first to lose all their pieces, and Chess 960 where the major pieces are jumbled up at the start to spice things up a bit. The chess nerds among you can tackle chess problems or replay classic matches, or work on your ELO rating (a bit like a golf handicap) by playing unassisted games.

Fritz isn't going to win any awards for originality. The interface is pretty standard, with 2D and 3D views of the board, and you move pieces with the Wii's basic controls, there's no motion control here. But it gets the important things right, namely playing chess to just the right level to let you learn, without ever being impossible to beat. Fritz manages to cater for everyone from the complete beginner to the expert player, by pairing a world-class AI with some smart game modes that let you learn at your own pace. If you are prepared to give your brain a workout, Fritz will help you learn, and in a few years time you might well be thanking it for the extra brain-cells.


You can support Luke by buying Fritz Chess