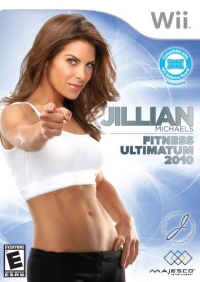 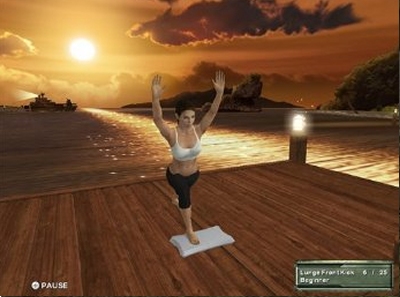 Jillian Michaels Fitness Ultimatum 2010 maybe just as shouty as the first game, but underneath the harsh Sergeant major exterior there are some intelligent improvements. Motion captured instruction, balance board support and dropping the tethered Nun-chuck make Fitness Ultimatum 2010 a better experience than last year.

After last year's solid edition of Jillian Michaels Fitness Ultimatum 2009, this year the game has been refreshed to focus more the Balance Board and Michaels herself. The single player mode in particular now has a host of activities featuring a motion captured Jillian Michaels.

The game is built around an impressive six month training plan that is set out with clear goals. While some may balk at the high bar for these targets it sets the tone that this is a game from the touch-love boot camp of fitness trainers.

This is reinforced with Jillian's no-nonsense approach as she appears on pretty much every screen of the game telling us we are 'awesome' or 'wasting her time'. Along with the focus on their trainer, Fitness Ultimatum 2010 adds some more interesting locations this year. Pacific jungle island. sand dunes, piers, jungles, deserts and beach landings all provide a realistic backdrop for your exertions.

Fitness routine wise the focus has moved from the rhythm mini-games to high impact activities that concentrate on control, timing, and placement. Progress is now monitored through the Wii-Fit balance board as well as the Wii-mote. Having seen a few related injuries, I was happy to see the Nun-chuck abandoned. The lack of a tethering cord between the controllers lets you focus on the exercises themselves rather than the technology.

The balance board is used for weigh-ins each time you play as well as exercises that work on pressure - lifting water pails, sledgehammer throws and basic sit-ups and push-ups. The push-ups are worth noting as they ask you to place your hands placed on either side of the board - which may sounds a little pedantic but is an intelligent way of ensuring good body position on this exercise. Exercises from last year return like the handcar pump are still available although now adjusted for the single controller.

Performing an exercise in the correct manner can make all the difference - and increased the benefit you will get from it.

Alongside the motivational value of Michaels' berations, the game looks to ensure authentic movements for each activity. Performing an exercise in the correct manner can make all the difference - and increased the benefit you will get from it.

Feedback is provided via a performance bar that changes colour to indicate good or bad motion. I liked the way the game also provided an audio feedback as I know many people like to exercise while watch TV rather than the game screen.

These are book ended with some comprehensive warm up and cool down exercises - essential if you are going to survive the pace set by Michaels.

These are book ended with some comprehensive warm up and cool down exercises - essential if you are going to survive the pace set by Michaels. I was also pleased to see a range of difficulty settings as there is no point in killing yourself on the first day's exercises if you then can't continue through the following weeks. Like the six month plan suggests this is all about the long game.

Alongside the single player modes there are some multiplayer competitions and challenges. This turned the game from one person's fitness routine into more of a minigame come workout. The added incentive of getting in shape for the next time you play the multiplayer also worked well in our household.

Jillian Michaels Fitness Ultimatum delivers a solid update to an energetic exercise game. Even if this isn't your cup of tea there is enough to keep you busy for weeks. The variety of activities and long reaching plans make this a strong contender amongst the ever increasing number of exercise games on the Nintendo Wii.

You can support Luke by buying Jillian Michaels Fitness Ultimatum 2010