Other GamePeople columnists have reviewed this from their perspective - huh?:
Family Gamer (360)
Domestic Gamer (360) 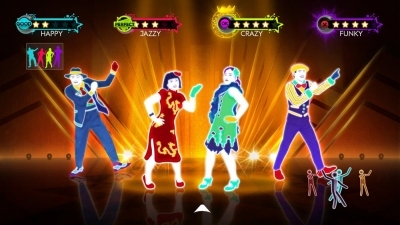 Just Dance 3 turned my serious dancing exercise into something fun and social. Getting eight friends and family dancing on the Wii at the same time (rather than just taking turns) was more important to me than Kinect's full body detection.

I'm into dancing, but not at parties. For me dancing is about a work out on my own with some great music on. I've just never really made the jump to doing that in public -- well not outside my various dance classes.

I was never really taken with the various Wii dancing game. They pretty much all take a sport that I really love and turn it into a derivative party game. Everybody seems to love Just Dance, and I admit that I can see why, but it's just not been for me. When I have played dance videogames it's been on Kinect -- Dance Central is actually pretty good and gets you pulling off real dance moves.

When I heard about Just Dance 3 on the Kinect I was quite looking forward to giving it a go. Unfortunately though it turned out to be another party game rather than getting you to learn real technique and coordination. In fact it seemed even more forgiving than the Wii game. I played it for a while at a friend's house but don't think I'll be getting it myself.

Then, the other day, something surprising happened. My brother got a copy of Just Dance 3 on the Wii (no big surprise there) and I realised it actually had some new features that actually sounded pretty good. I'd gathered from playing the Kinect game that this version offered different choreography for each of the four dancers in a song -- but on Kinect that got lost somewhat behind trying to get the camera to actually see me.

On the Wii these dances worked much better. Not only were they more challenging than the previous versions, but having bespoke choreography for different players means you can dance the same song multiple times without it getting samey. This is much more like my real dance sessions where I will just get in the zone and dance the same song over and over until I have perfected it.

Having bespoke choreography for different players means you can dance the same song multiple times.

The Wii version also has another mode on the 360 Kinect (ed: and PlayStation Move) games. There are a couple of ways to play with 8 people. Firstly there is the Battle mode where you all take it in turn that all the systems share, but then on the Wii there is a Hold Your Hand mode where eight of you can all dance at the same time.

You play this in four pairs, each with one of the four Wii-motes. The dances have been cleverly choreographed so that all the moves require you to hold one or other of your partners hands. Although it doesn't know where your other limbs are by tracking the connecting point between the pairs of dancers Just Dance 3 does a pretty good job of scoring the partnership who are best in time with the moves.

The only problem here (a little like the Kinect version, but for different reasons) is the amount of space you need to play it with 8 people. I ended up taking the Wii and controllers down to the dance studio for a session with my dance club friends. Although they, like me, were a little reticent at first once we got going it was a lot of fun.

It got me dancing with my family and friends much more than I had ever done before.

Just Dance 3 on the Wii threw me a few surprises and managed to scratch my proper dancing itch. But what I realise now is that it got me dancing with my family and friends much more than I had ever done before, and turned something I thought was just for keep fit in to a much more social experience.


You can support Luke by buying Just Dance 3