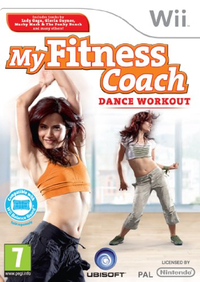 My Fitness Coach Dance Workout focuses on quick rhythm and movement exercises. While a sensible diversification, the complexity got in the way of the calorie burning for me.

Dance Workout, the latest in the My Fitness Coach line of games, adds Latin dance to a more traditional workout. It's great if you fancy learning some swish moves, but you might find it hard going if you have two left feet.

Dance and fitness are two entirely different activities that in videogame land have become closely related - particularly on the Wii. I love the fitness games, they've helped me lose a fairly large chunk of weight. I have also really enjoyed dance games, even those that came in the most unlikely contexts like Ravin' Rabbids or the "not really designed for 32 year-old blokes but still rather fun" All Star Cheerleader. But I'm still to be convinced about combining the two.

Dance Workout is similar in many ways to previous My Fitness Coach games, consisting of workout routines of various lengths lead by a virtual fitness instructor. The twist is that some of the exercises are dance routines, specifically Latin dances such as the Merengue. You can pick your own routines or let the game pick them for you based on you current fitness. There is also a calendar for tracking your progress and a weighing facility.

Along with the dancing are warm-up and cool-down sessions, rhythm boxing, and some mildly diverting but mostly not very strenuous games. While the variation is welcome there are plenty of other fitness games that do this better - including My Fitness Coach Cardio Workout, which really nailed the rhythm boxing side of things. Here though, I was expecting a game largely centred around dance and was disappointed to find that this was only a part of it.

The actual dance system is reasonably well implemented but suffers from a couple of flaws. These won't be a problem for you if you are already quick on your feet, but make it very frustrating if you need a little practice before hitting our groove.

The twist is that some of the exercises are dance routines, specifically Latin dances such as the Merengue.

Latin dance is largely about footwork and body movement, but because Dance Workout uses the Wii Remote (or two if you have them), you are actually scored based on your hand motions. This meant that I was forever getting in a muddle trying to concentrate on what my hands were doing to score well, but also trying to do my best to follow the footwork. While this is a problem for all dance games that don't use a mat or the Balance Board, it's more of a problem here as footwork is so critical in Latin dance and it seems silly to be judging you on how well you can swing your arms around.

To compound my problems, Latin dance is also pretty quick and frequently quite complicated. For the uninitiated, or just plain uncoordinated, trying to follow the moves is really very tricky. Dance Workout does give you instruction but the learning curve is far too steep. After getting you to do the moves at half speed, still pretty fast for beginners, the pace quickens and it throws in a load of extra complications before you've got the hang of the basics. I found the whole experience deeply frustrating. The end result was that it was hard to work up a sweat as I was constantly getting lost and just standing there looking mildly bemused.

Thankfully Dance Workout does have a practice mode where you can try out all the dance routines, stopping and starting the session, rewinding, and generally just keep bashing away at it. You can also view them the moves from different angles, although not from behind, which seems like a strange omission as it would have been the most useful angle. If you are prepared to spend the time with it, the practice mode is a pretty good way to pick up a few new moves, but it seems a shame that better instruction couldn't have been built into the routines for beginners.

If you are nimble on your feet, already know how to dance a little bit, or are prepared to spend lots of time in the practice mode, then you could get a good short workout from My Fitness Coach: Dance Workout, and pick up a lot of slick moves into the bargain.

I was hoping for a more intense session from Dance Workout. That was mostly because of my frustrations in the dance sessions, but also because of the sub-par rhythm boxing (odd, as My Fitness Coach: Cardio Workout got it spot on) and fairly pointless minigames.

But if you are nimble on your feet, already know how to dance a little bit, or are prepared to spend lots of time in the practice mode, then you could get a good short workout from My Fitness Coach: Dance Workout, and pick up a lot of slick moves into the bargain.


You can support Luke by buying My Fitness Coach: Dance Workout

FitGameForum.com wrote this Fit Gamer article under the watchful eye of Luke Pyper.