Other GamePeople columnists have reviewed this from their perspective - huh?:
Haiku Gamer (Wii) 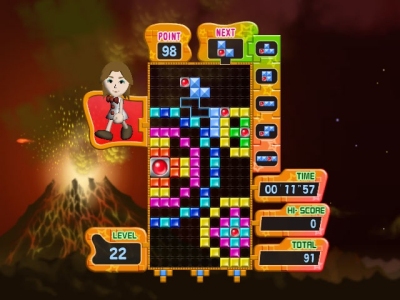 As Paul Leader of Wii-Fit Forum found out, the release of Tetris Party is well timed. Last month I had my 30th birthday, and as a result I have been doing a little bit of regressing (I got Lego). Right on cue, along comes Tetris Party on WiiWare to take me back to my first year at high school, being hypnotized by the ever faster cascade of bricks on the tiny monochrome screen of the old Gameboy, all the while humming along to Korobeiniki.

Tetris Party updates the classic game, claiming 18 new modes although I could only actually identify the following. Beginner's Tetris: The basic game, but with a smaller grid and a number of smaller Tetriminos (the shapes) such as three long straights and three piece corners. 3-minute high-score mode. Co-op Tetris, play with a friend on an extra-large grid. Field Climber where you try to guide a little man up a vertical course and collect the flags as you go. Shadow - fill in predefined shapes with Teriminos. Stage Racer - navigate a single shape through an tunnel. Dual Spaces - section off empty space, and gain points for every empty space you lock out by placing their Tetriminos to create larger areas of their own color.

What is genuinely new is Wii-Fit Balance Board Tetris.

So that's a few new and interesting twists on on the old standard. All of these are fun for a while, but nothing radically different, and few beat the classic game for that addictive quality. The best modes are those that stick to the old format. The others complicate the basic game without really adding much. While the shadow mode is a fun puzzle, the others are weak attempts to shoe-horn those classic shapes into alternative puzzle games for the sake of it.

What is genuinely new is Wii-Fit Balance Board Tetris. Keeping faithful to the classic game, you control the blocks using the balance board, leaning left and right to move the blocks, squat to rotate, and lean forward or back to drop the blocks. As a concession to the problems inherent in controlling anything this complex with the balance board the game has been simplified. The Tetriminos are simplified and only use three blocks, the grid is smaller, and the landing time (the time you have to leave a block before it is finally placed) seems longer, allowing you to move the blocks around for a while after they had landed.

Helpfully, your center of balance is displayed on a diagram of the balance board. This quickly becomes essential as it is easy to come up from a squat (to rotate your piece) learning off-center, resulting in your blocks moving sideways, or worse getting dropped. Control is tricky at first but you get the hang of things pretty quickly, but it is frustratingly easy to make mistakes, so keep an eye on your COB.

As with the classic Gameboy original, this is a excellent way to utterly lose track of time.

While the game itself is tactically simpler than the standard version, the concentration required to move the blocks around makes up for it and it becomes a genuinely entertaining game, at least for a while. There is something remarkably visceral about using your body to play a game that is already utterly hypnotic.

A game will take you between 10 and 15 minutes and it certainly makes you aware of your leg muscles. It may not be a workout, but will certainly help develop those leg muscles. As with the classic Gameboy original, this is a excellent way to utterly lose track of time, but this time you will have aching legs and back rather than thumbs and eyes.

If you loved the original, it is well worth the Wii points, and the balance board is great fun, at least for a few games.

You can support Luke by buying Tetris Party