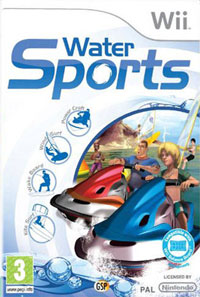 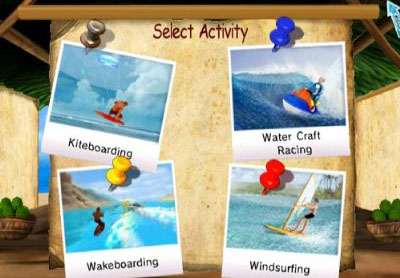 Water Sports Wii adds variety to your balance board fitness regime. Although limited in terms of gaming, it is good to see a game that places balance rather than weight-loss at the centre of its health plan.

Physical health isn't just about burning calories and building big muscles, it's also about motor control and balance, just ask anyone who does serious amounts of yoga. This is especially true as we get older. The fine control muscles that help us balance can start to weaken, which is one of the reasons older people are more prone to falling.

A big aspect of Wii-Fit has been its balance games and of course the Balance Board. Balance forms a key part of Wii-Fit's somewhat dubious age assessment. Water Sports Wii supports the Balance Board and offers some fresh ways to tax your balance skills, at least for a little while.

At first glance I assumed that Water Sports Wii was a Nintendo game, and part of the Wii Sports lineup along with Wii Sports Resort, but this is not the case and it shows in the shallowness of the experience.

It consists of four mini-games: Kite Surfing, Wind Surfing, Jet-ski, and Wake-boarding. The setup is largely the same in each case - you race around a course collecting tokens, jumping ramps, and doing tricks, all while trying to beat your opponents.

While it isn't particularly complicated, that doesn't mean it's easy - especially with the Balance Board. You can use the Wii-motes instead but this kind of side steps both the challenge and fun on offer here. It does take some time to master though.

The Balance Board controls are very sensitive and take a bit of getting used to. I found relaxing, bending my knees, and standing with my feet at the edges of the board helped, but it still took me a while to get the hang of it.

As part of a larger mini-game collection Wii Water Sports might have been worth it, but on its own it barely constitutes a full game.

As you progress, Water Sports really starts to tax your balance skills, just as much as any of the Wii-Fit balance events. As I mentioned though, the focus here is co-ordination rather than aerobic exercise.

As a way to extend your Wii-Fit balance regime Water Sports works well, but don't expect anything radically original. Although it's a nice change, it's not as fleshes out as Nintendo's own balance experiences.


You can support Luke by buying Water Sports