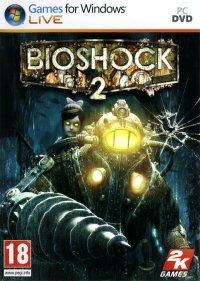 Bioshock 2 is a Shooting game available on the PC 360.

Bioshock 2 is a Shooting game. Shooting games present a world in which the character must shoot their way out of dangerous situations. They provide the player with an array of weapons tailored to specific tasks. This unavoidably involves a combination of fisticuffs and gun based fighting that dictates the violent nature of these experiences. Beneath this harsh exterior though is often an intricate tactile game - and this is usually what drives the player.

We have our reporters and community keeping an eye on Bioshock 2 for you, and we'll keep you up to date with the latest developments as they happen.

Bioshock 2's PC multiplayer leverages the tragic events of the fall of Rapture as a straightforward, chaotic online shooter. It's a combination that probably shouldn't work, but does.

Previously on Story Gamer - last time, I reviewed the single-player part of Bioshock 2, in which you play as a Big Daddy, ten years after the events of the first game.
read on...

Bioshock 2's essence feels somehow diluted by returning such a hallowed location. Although the atmosphere and environments conjour up the same rich experience, the story and revelations regarding Rapture's continued demise were not nearly as powerful as they could have been.

The most fascinating part of the original Bioshock for me was the journey through Rapture. The slow descent into this failed utopia, unearthing its brave vision and ultimate destruction, went hand in hand with the discovery of your own characters history and purpose.
read on...

Bioshock 2's single player game could never be as fresh and novel as the first installment, but makes up for that familiarity with improved mechanics and an engaging story of its own.

The original Bioshock had one of the most praised stories of any game of the last few years, with a strong narrative journey as your character explores the sunken city of Rapture, taunted over the radio by the city's creator, Andrew Ryan. It had a memorable twist midway through, one that causes you to reinterpret your experience of the game up to that point, and alternative endings based on your treatment of the Little Sisters. The history of Rapture, of its construction and fall into anarchy, was told through scattered audio diaries and the environment itself, the evidence of dilapidation, graffiti and destruction.
read on... Bioshock 2 faces the connundrum of a broken world and lays the blame at our feet. For someone of faith, the vivid conjuring of Rapture is a fascinating challenge to a judgemental deity. In the quiet between the fighting we hear the frightful idea that the world's problems are in part our own doing.

BioShock 2 revisits the successful formula of the original BioShock game, drawing you through a dilapidated and corrupt city on a journey of self discovery and adventure. It's another brilliant offering from 2K that tells a tale of a failed society and how your own actions affect those around you. Prepare to venture under the sea once again.
read on...