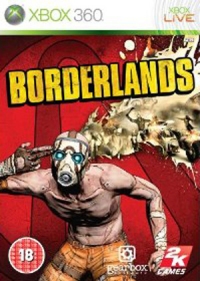 Borderlands is a Shooting game available on the 360. It can be played in Firstperson Singleplayer Competitive modes.

Borderlands is a Shooting game. Shooting games present a world in which the character must shoot their way out of dangerous situations. They provide the player with an array of weapons tailored to specific tasks. This unavoidably involves a combination of fisticuffs and gun based fighting that dictates the violent nature of these experiences. Beneath this harsh exterior though is often an intricate tactile game - and this is usually what drives the player.

Borderlands can be played in a Firstperson mode. First Person games view the world from the eyes of the in-game character. You don't see the character themselves apart from their hands, gun or possibly feet as in Mirror's Edge. Because of the imediacy of the experience and sheer volume of visual information the player is offered First Person games lend themselves to the shooting genre. The FPS view enables players to immerse themselves in the experience and react quicker to events in the game. Other games have used a first person view to deliver an unusual perspective on an old genre - Mirror's Edge for example delivers a Platforming genre through a First Person view.

Borderlands can be played in a Singleplayer mode. Single Player Campaign games focus on one player's experience. Rather than collaborate with other players either locally or online, players progress alone. The campaign style of gameplay offers a connected series of challenges to play through. These chapters work together to tell a story through which players progress. Single player games are able to focus on one experience of a scenario, so that it is usually a richer, more visceral game.

Borderlands can be played in a Competitive mode. Competitive Multiplayer games provide experiences where players compete against each other and the computer. Obviously lending itself to sports and team games, these competitive engagements have also dominated the shooting and fighting genres because of the direct combat and expertise involved in each. Although these games were originally played in a split screen style, more recently they are played online via services such as PlayStation Network, Xbox Live and the Nintendo Wireless Connection.

We have our reporters and community keeping an eye on Borderlands for you, and we'll keep you up to date with the latest developments as they happen.

Spinning a successful and addictive formula than kept me playing for over thirty hours, Borderlands on 360 and PS3 is not the type of game that immediately comes to mind when thinking of a deep and meaningful experience. But the consistent presentation, the brief moments of harrowing drama and the lashings of black humour produced a package that was memorable and surprisingly effective.

This is not the most obvious title you'd expect me to be covering. After all, Borderlands is a pretty shallow experience all told and it's easy to sum up the game within a sentence as it rarely does anything deeper than feed into a Diablo-style addiction for loot. Indeed, you could argue that this could be a National Rifle Association's members wet dream come to life as the main driving force behind this game is the acquisition of a 'Gazillion' different type of firearms. It's about as soulless as Pandora, the bleak planet on which this human borderland is set on.
read on...

Set on the harsh frontier planet Pandora, Borderlands on 360 and PlayStation 3 consoles is an atmospheric and unique-looking Role-playing shooter that puts you in search of a mysterious Alien Vault. Built from the ground-up for four-player co-op, Borderlands features an amazing content generation system which means a near-endless variety of weapons and items are available to customise your character in the game. With a bold art-style and a deep engrossing story, this is a role-playing shooter unlike any other game you'll play this year.

What first impresses is the bold art style. Instead of going for a realistic look, Borderlands has a distinctive cel-shaded design mixed with a gritty and post-apocalyptic setting that makes for bizarre and effective visuals. Along with this Mad-Max graphic style is a dose of wicked black humour. Whereas Fallout 3's humour was sporadic and weighed down by the depressing tone of the whole game, Borderlands is full of self-referencial moments which take a wry look at itself and the genre it occupies.
read on...