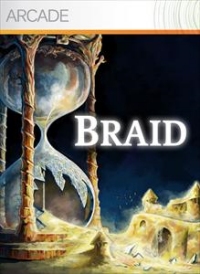 Braid is a Platforming game available on the 360. It can be played in Singleplayer modes.

Braid is a Platforming game. Platform games task you with getting from point A to point B. The world you journey through is usually based on different levels, and populated with enemies, switches and lifts to be negotiated. As you work through each level you pick up various collectables that accrue score, special abilities and access to hidden areas.

Braid can be played in a Singleplayer mode. Single Player Campaign games focus on one player's experience. Rather than collaborate with other players either locally or online, players progress alone. The campaign style of gameplay offers a connected series of challenges to play through. These chapters work together to tell a story through which players progress. Single player games are able to focus on one experience of a scenario, so that it is usually a richer, more visceral game.

We have our reporters and community keeping an eye on Braid for you, and we'll keep you up to date with the latest developments as they happen.

Braid may start as a platform game, but it soon becomes something endearing, intriguing and very personal. It joins the short list of games that have warmed the heart of this old-school returning gamer.

Four of my favourite games from 2010 are from independent developers. VVVVVV (PC) and Super Meat Boy (360) both tweaked at my love of sadistic challenges. Limbo (360) strung me along with a dark narrative and lateral thinking puzzles. Finally, The Misadventures of P.B. Winterbottom (360) enchanted with its eccentricity, art nouveau style and time bending puzzles. A varied bunch I'm sure you will agree.
read on...

Braid on XBLA communicates something genuinely true about human relationships. The metaphors it creates are beguiling and wonderful, it's just a shame they are interspersed with such heavy handed prose.

From the creative mind of Jonathan Blow comes the time twisting adventure of a single suited man, Braid. An intelligent 2D platformer, Braid captures the imagination with its unique use of time to create the most fascinating puzzles. But while its merits as a game were clear, it was the more artistic elements that really struck my scared gamer chord.
read on... Braid is an unusually difficult platform game. Being able to undo your mistakes by rewinding time sounds like it should help, but when you hit the difficulty wall Braid doesn't do enough to get you on your way again.

As I sat down, completely tired out from a training ride on my newest bike, I was really looking forward to playing the latest addition to my XBLA game collection, Braid.
read on...

Braid turns simplicity into mind-melting puzzles. Setting your face to finish this game may take some time, but is well worth it.

XBLA is a great place to fund unusual and interesting games. After the fresh momentum based platforming of N+, Braid looks like any other platform game but has an intriguing trick: time-travel.
read on... Braid is a time-bending puzzle platform game, arguably with more of a picture to paint than a story to tell. It's like flicking through a photo album, solving a difficult problem in your sleep, and missing the last train home.

To set an appropriate tone for discussing Braid, I was tempted to randomise the order of my paragraphs, and mix in some discussion about my family and world history. Some people have pinned down a concrete story for Braid, but I find its plot resists linear interpretation. Braid may be interpreted with a central narrative, but it's also about much more besides.
read on...