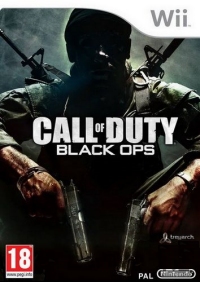 Call of Duty Black Ops is a Shooting game available on the Wii DS 360. It can be played in Singleplayer Firstperson modes.

Call of Duty Black Ops is a Shooting game. Shooting games present a world in which the character must shoot their way out of dangerous situations. They provide the player with an array of weapons tailored to specific tasks. This unavoidably involves a combination of fisticuffs and gun based fighting that dictates the violent nature of these experiences. Beneath this harsh exterior though is often an intricate tactile game - and this is usually what drives the player.

Call of Duty Black Ops can be played in a Singleplayer mode. Single Player Campaign games focus on one player's experience. Rather than collaborate with other players either locally or online, players progress alone. The campaign style of gameplay offers a connected series of challenges to play through. These chapters work together to tell a story through which players progress. Single player games are able to focus on one experience of a scenario, so that it is usually a richer, more visceral game.

Call of Duty Black Ops can be played in a Firstperson mode. First Person games view the world from the eyes of the in-game character. You don't see the character themselves apart from their hands, gun or possibly feet as in Mirror's Edge. Because of the imediacy of the experience and sheer volume of visual information the player is offered First Person games lend themselves to the shooting genre. The FPS view enables players to immerse themselves in the experience and react quicker to events in the game. Other games have used a first person view to deliver an unusual perspective on an old genre - Mirror's Edge for example delivers a Platforming genre through a First Person view.

Call of Duty: Black Ops takes us on a darker journey into the Cold War. It traverses the Thatcher-Regan era as you fight with Black Ops soldiers through Vietnamese jungles to the snowy Ural mountains. Of course there's more of the standard-setting multiplayer, but this is now joined by 4-player online and 2-player local co-op and a fully featured Wii version.

With Modern Warfare and Call of Duty now two separate franchises, Black Ops follows up World at War in some style. This time we are plunged deep into the mysteries of the Cold War as we find plenty to fuel varied and impressive gameplay. A huge variety of scenarios means dramatic environments - from the jungles of Vietnam to secret Russian bases. Thanks to the time period we'll also be able to customise weapons to a degree never experienced before, both in the single player campaign and popular multiplayer modes.
read on... Call of Duty Black Ops Wii shouldn't exist. But by pushing the Wii to its limit Trearch delivers an experience on a par with the 360 and PS3. What I wasn't expecting though, was for it to be so much more unsettling on Nintendo's friendly console.

Call of Duty Black Ops on the Wii mirrors the experience offered by the 360 and PS3 surprisingly closely. It's essentially the same campaign, dialogue and story - and even has a strong multiplayer and zombies mode. I pretty much knew this before I started playing, but that still didn't really prepare me see my friendly little Wii offering up torture, swearing and grizzly death in the first few minutes.
read on...

Call of Duty Black Ops is another strong first person shooter on the DS. Its varied environments and meaty shooting mechanics give GoldenEye DS a run for its money although I did miss Bond's sneaking about.

Call of Duty: Black Ops reminded me of playing games quite some time ago. That's not a bad thing, it is just telling of the technology on offer. What was different here though was the stylus control. This makes it feel more like the mouse driven experiences on the 16-bit Amiga and Atari ST than the game pad centric devices like the N64 or Saturn.
read on...

Call of Duty Black Ops Wii stands tall alongside its 360 and PS3 comrades. Visually sound, and with flexible controls it only falters at the lack of split screen and Wii-speak support.

Many people think there aren't any hardcore shooting games on the Wii. If you look into it in detail though there are a range of games that have slowly evolved the use of the Wii-mote and Nun-chuck for shooting.
read on...