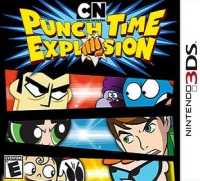 Punch Time Explosion is a Platforming game available on the 3DS. It can be played in Competitive modes.

Punch Time Explosion is a Platforming game. Platform games task you with getting from point A to point B. The world you journey through is usually based on different levels, and populated with enemies, switches and lifts to be negotiated. As you work through each level you pick up various collectables that accrue score, special abilities and access to hidden areas.

Punch Time Explosion can be played in a Competitive mode. Competitive Multiplayer games provide experiences where players compete against each other and the computer. Obviously lending itself to sports and team games, these competitive engagements have also dominated the shooting and fighting genres because of the direct combat and expertise involved in each. Although these games were originally played in a split screen style, more recently they are played online via services such as PlayStation Network, Xbox Live and the Nintendo Wireless Connection.

Cartoon Network: Punch Time Explosion 3DS will let you pit favourite characters against each other in arena brawls.

Cartoon Network: Punch Time Explosion is a crossover fighting game inspired by Smash Bros. Brawl. It will include popular characters from 11 different Cartoon Network Shows, including Ben 10: Ultimate Alien, Samurai Jack, and the Powerpuff Girls. A total of 18 playable characters are available, with 19 summoned assistants. An additional two secret characters are yet to be revealed.
read on...

A collection of our artisan reviewers are playing and reviewing Punch Time Explosion and will be writing their anecdotal account soon.