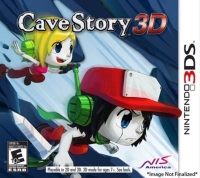 Cave Story 3D is a Platforming game available on the 3DS. It can be played in Singleplayer modes.

Cave Story 3D is a Platforming game. Platform games task you with getting from point A to point B. The world you journey through is usually based on different levels, and populated with enemies, switches and lifts to be negotiated. As you work through each level you pick up various collectables that accrue score, special abilities and access to hidden areas.

Cave Story 3D can be played in a Singleplayer mode. Single Player Campaign games focus on one player's experience. Rather than collaborate with other players either locally or online, players progress alone. The campaign style of gameplay offers a connected series of challenges to play through. These chapters work together to tell a story through which players progress. Single player games are able to focus on one experience of a scenario, so that it is usually a richer, more visceral game.

Cave Story brings 8-bit platforming to the 3DS. However, an uncertain 3D visual style and the challenge of accommodating touch screen controls still leave a lot to be answered by this darling of old school gamers.

Cave Story is one of those games deemed worthy of adoration by hardcore gaming fans. Originally free on the PC (and later available on Wii-ware and DSi-ware), it features classic 2D platforming in a homage to games like Metroid, Castlevania and even Jet Set Willy.
read on...

A collection of our artisan reviewers are playing and reviewing Cave Story 3D and will be writing their anecdotal account soon.