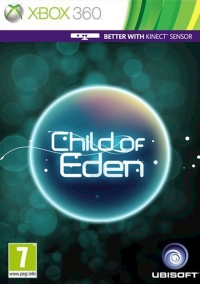 Child of Eden is a Shooting game available on the 360. It can be played in Thirdperson Singleplayer modes.

Child of Eden is a Shooting game. Shooting games present a world in which the character must shoot their way out of dangerous situations. They provide the player with an array of weapons tailored to specific tasks. This unavoidably involves a combination of fisticuffs and gun based fighting that dictates the violent nature of these experiences. Beneath this harsh exterior though is often an intricate tactile game - and this is usually what drives the player.

Child of Eden can be played in a Thirdperson mode. Third Person games view the world from over the right shoulder of the character being controlled. This enables you to see the character you are controlling as well as their surrounds. Although not as immersive as first person, third person games enable more complex moves and interactions with the environment.

Child of Eden can be played in a Singleplayer mode. Single Player Campaign games focus on one player's experience. Rather than collaborate with other players either locally or online, players progress alone. The campaign style of gameplay offers a connected series of challenges to play through. These chapters work together to tell a story through which players progress. Single player games are able to focus on one experience of a scenario, so that it is usually a richer, more visceral game.

Child of Eden takes Rez into the motion controlled era. Rhythm, visuals and audio pummel the senses in one of the first truly hardcore Move and Kinect experiences.

Child of Eden, from Tetsuya Mizuguchi at Q? Entertainment, follows his seminal rhythm action experiences Rez and Lumines. In similar form, Child of Eden is an on-rails shooter which is said to be part of study of Synaesthesia, a condition that blends touch, vision and sound in to a single experience.
read on... Child of Eden turns Rez's nightmare into a dream. Everything, from the Kinect controls to the visuals and music is designed to transport you to another place. However, the question is whether Child of Eden can find the audience it rightly deserves.

If any game stayed with me while I wasn't playing it Rez did. At its height I'd close my eyes and see the stream of beats and swirling colours of its usual gameplay. As you might imagine, I'm more than a little excited about Child of Eden, the spiritual motion controlled successor to Rez.
read on...