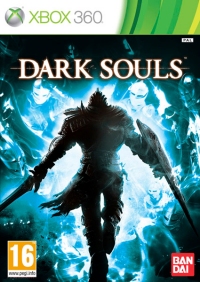 Dark Souls is a Adventuring game available on the 360. It can be played in Thirdperson Singleplayer modes.

Dark Souls is a Adventuring game. Adventure games are enjoyed for two reasons: they provide enemy encounters that require tactics and strategy to conquor, and they create a fantasy world in which to explore and adventure.

Dark Souls can be played in a Thirdperson mode. Third Person games view the world from over the right shoulder of the character being controlled. This enables you to see the character you are controlling as well as their surrounds. Although not as immersive as first person, third person games enable more complex moves and interactions with the environment.

Dark Souls can be played in a Singleplayer mode. Single Player Campaign games focus on one player's experience. Rather than collaborate with other players either locally or online, players progress alone. The campaign style of gameplay offers a connected series of challenges to play through. These chapters work together to tell a story through which players progress. Single player games are able to focus on one experience of a scenario, so that it is usually a richer, more visceral game.

Even with a different pallet and game structure Dark Souls is still the spiritual successor to cult PS3 exclusive Demon's Souls. Maybe the biggest difference is its arrival on the 360 as well as Sony's console.

There are many comparisons to be drawn between Demon's Souls and Dark Souls. Despite different worlds and stories both offer a similar medieval gothic style and the promise of relentlessly punishing game play. However, closer inspection begins to reveal subtle differences.
read on...

A collection of our artisan reviewers are playing and reviewing Dark Souls and will be writing their anecdotal account soon.