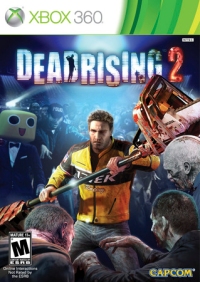 Dead Rising 2 is a Shooting game available on the 360 PS3. It can be played in Thirdperson Singleplayer modes.

Dead Rising 2 is a Shooting game. Shooting games present a world in which the character must shoot their way out of dangerous situations. They provide the player with an array of weapons tailored to specific tasks. This unavoidably involves a combination of fisticuffs and gun based fighting that dictates the violent nature of these experiences. Beneath this harsh exterior though is often an intricate tactile game - and this is usually what drives the player.

Dead Rising 2 can be played in a Thirdperson mode. Third Person games view the world from over the right shoulder of the character being controlled. This enables you to see the character you are controlling as well as their surrounds. Although not as immersive as first person, third person games enable more complex moves and interactions with the environment.

Dead Rising 2 can be played in a Singleplayer mode. Third Person games view the world from over the right shoulder of the character being controlled. This enables you to see the character you are controlling as well as their surrounds. Although not as immersive as first person, third person games enable more complex moves and interactions with the environment.

Dead Rising 2 bookends the 360's development with an expanded and impressive up-scaling of the launch title. More plodding zombies and more ways to kill them is exactly what was needed.

Dead Rising 2 is a Capcom survival horror that follows up the original zombie slugfest. Set five years after the original, we find Chuck Greene take the role as the uninfected and, like Frank West, face the zombie hordes to save humanity. Like the first game, the number of slow plodding assailants on screen and the variety of ways to dispatch them dominates the fun.
read on...

Dead Rising 2 is a zombie slaying romp through faux Las Vegas. But beyond the mass slaying of the undead there is a gnawing balancing act of commitment and risk. The ticking clock haunts your play as those around you meet their demise and question you heroism.

I always like killing zombies, who doesn't (ed: Audio Gamer?). Simple for developers to design, and morally unambiguous, they are pop-cultures whipping boy of the moment. Like Nazis before them they just need killing. Killing vast swathes of them is not only fun but easy.
read on...

Dead Rising 2 wades through the gore with unexpectedly touching social commentary. Like a good zombie film, the violence is there because of what it represents just as much as its shock value.

Dead Rising 2 offered me a wealth of soulful content to devour once I got past my own parental zombie fatigue and the familiar Dead Rising setup. By skilfully using RPG elements and a healthy dash of Rogue-like mechanics I was able to appreciate the commentary on modern society that the game slotted in between bouts of gore and vomit.
read on... Dead Rising 2 is all gummed up with zombies. Dispatching the undead is a hilariously macabre experience that should be enjoyed without the distractions of other players - not to mention away from enquiring family minds.

Dead Rising 2's Nevada gambling town setting is a sprawling complex packed to the gills with shuffling zombies, much like the huge shopping mall location of the first. With the addition of a co-op mode and an online series of competitive four player mini-games, Dead Rising 2 towers over its older sibling.
read on...

Dead Rising 2 360 is a practically perfect sequel, opening out the story while playing to the series' strengths and addressing most of its weaknesses.

If you hated the original Dead Rising, or were lukewarm on downloadable prequel Case Zero then Dead Rising 2 isn't going to win you round.
read on...