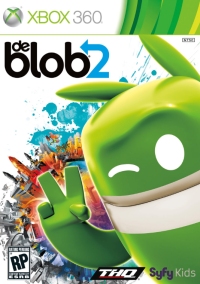 DeBlob 2 is a Platforming game available on the 360. It can be played in Singleplayer Cooperative Splitscreen modes.

DeBlob 2 is a Platforming game. Platform games task you with getting from point A to point B. The world you journey through is usually based on different levels, and populated with enemies, switches and lifts to be negotiated. As you work through each level you pick up various collectables that accrue score, special abilities and access to hidden areas.

DeBlob 2 can be played in a Singleplayer mode. Single Player Campaign games focus on one player's experience. Rather than collaborate with other players either locally or online, players progress alone. The campaign style of gameplay offers a connected series of challenges to play through. These chapters work together to tell a story through which players progress. Single player games are able to focus on one experience of a scenario, so that it is usually a richer, more visceral game.

DeBlob 2 can be played in a Cooperative mode. Cooperative Multiplayer games provide an experience that is played symaltaneously by multiple players. Unlike the simple arena competitive multiplayer style games where players try to kill the most enemies, true co-operative games are designed to take a group of players through a campaign experience together. This will involve sections where players have to work together to proceed - either from the sheer difficulty as in Halo 3 on 360 or by the design of levels such as LittleBigPlanet on PS3.

DeBlob 2 can be played in a Splitscreen mode. Split Screen Multiplayer games involve multiple players by providing a portion of the screen for each person. This enables two, three or four players to be involved in the game using just one console. Although popular for the PS2, Gamecube and Wii it is becoming less common in modern 360 and PS3 games which are less willing to sacrifice horsepower from the visuals to accomodate the extra players - they opt for an online multiplayer mode instead.

de Blob leaps from Wii to 360 and PS3 in his return that paints the world back to technicolor. Four player co-operative platforming is the main draw as the colourful formula gets a second bite at the cherry.

de Blob returns but not only on the Wii. February 2011 sees the colouring platform fun spread to 360, PS3 as well as on Nintendo's console. de Blob 2: The Underground brings back the characters and play style of the first game.
read on...

A collection of our artisan reviewers are playing and reviewing DeBlob 2 and will be writing their anecdotal account soon.