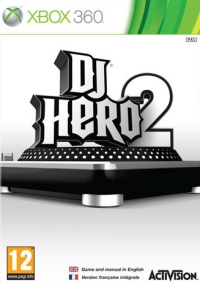 DJ Hero 2 is a Rhythmaction game available on the 360. It can be played in Singleplayer Competitive modes.

DJ Hero 2 is a Rhythmaction game. Rhythm action games combine the enjoyment that comes from creating music with the challenge of video game scoring. The player is usually tasked with dancing on a mat, tapping a touch screen, pressing a button, singing into a mic or strumming a fake guitar controller in time with the music.

DJ Hero 2 can be played in a Singleplayer mode. Single Player Campaign games focus on one player's experience. Rather than collaborate with other players either locally or online, players progress alone. The campaign style of gameplay offers a connected series of challenges to play through. These chapters work together to tell a story through which players progress. Single player games are able to focus on one experience of a scenario, so that it is usually a richer, more visceral game.

DJ Hero 2 can be played in a Competitive mode. Competitive Multiplayer games provide experiences where players compete against each other and the computer. Obviously lending itself to sports and team games, these competitive engagements have also dominated the shooting and fighting genres because of the direct combat and expertise involved in each. Although these games were originally played in a split screen style, more recently they are played online via services such as PlayStation Network, Xbox Live and the Nintendo Wireless Connection.

We have our reporters and community keeping an eye on DJ Hero 2 for you, and we'll keep you up to date with the latest developments as they happen.

DJ Hero 2 creates genuine musical moments for those who missed, or conveniently side-stepped, the plastic instrument revolution of the last few years. It may be a more introverted experience, but it is all the more intense for it.

Offering the opportunity to (hip-)hop on an entirely new music game bandwagon, DJ Hero 2 brings the art of mixing to the Hero franchise with it new turntable peripheral. Similarities with Guitar Hero, the other game in Activision's 'Hero' franchises remain, but DJ Hero does a lot to distinguish itself from its big brother to create a fresh new experience.
read on...

when DJ Hero first found its way into my 360 last year, i felt pretty reluctant. as a true fan, the ongoing commercialisation of hip hop and the universalization of its style is a constant source of sadness.

what is more, from a music perspective, 'mashups' which seemed to be the main musical vehicle, were, already something of a tired phenomenon, and definitely one of those things that can be good when done well, but that will be super-lame if not.
read on... DJ Hero 2 refines this hidden gem of a music game. If there is any justice in the world, its two player battles, mainstream club aesthetic and smile inducing cheeky mix-ups will find a wider audience this time round.

Ironically I don't play many games these days. Those I do spend time with have to have a great soundtrack. On this basis the original DJ Hero scored well. Not only did it have a strong track-list but it also mixed its music intelligently. Interesting mash-ups of popular songs showed a genuine engagement with the culture around Activision's rhythm action DJ game, rather than just a passing ascent.
read on...