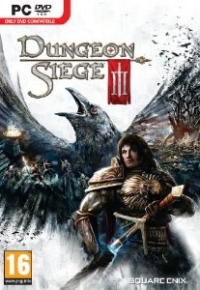 Dungeon Siege 3 is a Adventuring game available on the PC 360. It can be played in Thirdperson Singleplayer Cooperative modes.

Dungeon Siege 3 is a Adventuring game. Adventure games are enjoyed for two reasons: they provide enemy encounters that require tactics and strategy to conquor, and they create a fantasy world in which to explore and adventure.

Dungeon Siege 3 can be played in a Thirdperson mode. Third Person games view the world from over the right shoulder of the character being controlled. This enables you to see the character you are controlling as well as their surrounds. Although not as immersive as first person, third person games enable more complex moves and interactions with the environment.

Dungeon Siege 3 can be played in a Singleplayer mode. Single Player Campaign games focus on one player's experience. Rather than collaborate with other players either locally or online, players progress alone. The campaign style of gameplay offers a connected series of challenges to play through. These chapters work together to tell a story through which players progress. Single player games are able to focus on one experience of a scenario, so that it is usually a richer, more visceral game.

Dungeon Siege 3 can be played in a Cooperative mode. Cooperative Multiplayer games provide an experience that is played symaltaneously by multiple players. Unlike the simple arena competitive multiplayer style games where players try to kill the most enemies, true co-operative games are designed to take a group of players through a campaign experience together. This will involve sections where players have to work together to proceed - either from the sheer difficulty as in Halo 3 on 360 or by the design of levels such as LittleBigPlanet on PS3.

We have our reporters and community keeping an eye on Dungeon Siege III for you, and we'll keep you up to date with the latest developments as they happen. Dungeon Siege 3 is a middling hack 'n' slash adventure that fails to create a believable world. With even the most basic of fantasy films spending the majority of their budget on the creation of their world, it's an odd misstep for Dungeon Siege. Even the strong co-operative element can't quite make up for this.

It's been five years since the last Dungeon Siege game, and my cynical side can't help but think Dungeon Siege 3's existence represents the current creative climate of clinging on to any and all established franchises. The story has precious few ties to previous entries, meaning it could easily have been a new series.
read on...

Dungeon Siege III may downplay loot but its action and fighting focus nudges this dungeon crawler towards grander adventuring and role play territory.

I've always enjoyed dungeon exploration games, ever since playing Rouge and Nethack on a school networks during lunchtime. Not the most popular pastime I know, but something about the ever expanding dungeons and all that treasure was strangely addictive.
read on...