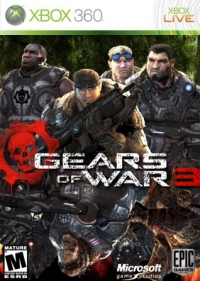 Gears of War 3 is a Shooting game available on the 360. It can be played in Thirdperson Singleplayer Cooperative Splitscreen modes.

Gears of War 3 is a Shooting game. Shooting games present a world in which the character must shoot their way out of dangerous situations. They provide the player with an array of weapons tailored to specific tasks. This unavoidably involves a combination of fisticuffs and gun based fighting that dictates the violent nature of these experiences. Beneath this harsh exterior though is often an intricate tactile game - and this is usually what drives the player.

Gears of War 3 can be played in a Thirdperson mode. Third Person games view the world from over the right shoulder of the character being controlled. This enables you to see the character you are controlling as well as their surrounds. Although not as immersive as first person, third person games enable more complex moves and interactions with the environment.

Gears of War 3 can be played in a Singleplayer mode. Single Player Campaign games focus on one player's experience. Rather than collaborate with other players either locally or online, players progress alone. The campaign style of gameplay offers a connected series of challenges to play through. These chapters work together to tell a story through which players progress. Single player games are able to focus on one experience of a scenario, so that it is usually a richer, more visceral game.

Gears of War 3 can be played in a Cooperative mode. Cooperative Multiplayer games provide an experience that is played symaltaneously by multiple players. Unlike the simple arena competitive multiplayer style games where players try to kill the most enemies, true co-operative games are designed to take a group of players through a campaign experience together. This will involve sections where players have to work together to proceed - either from the sheer difficulty as in Halo 3 on 360 or by the design of levels such as LittleBigPlanet on PS3.

Gears of War 3 can be played in a Splitscreen mode. Split Screen Multiplayer games involve multiple players by providing a portion of the screen for each person. This enables two, three or four players to be involved in the game using just one console. Although popular for the PS2, Gamecube and Wii it is becoming less common in modern 360 and PS3 games which are less willing to sacrifice horsepower from the visuals to accomodate the extra players - they opt for an online multiplayer mode instead.

Gears of War 3 benefits from a new graphics engine, while also finally delivering on the promise of four-player campaign co-op.

Gears of War has always been important to developer Epic Games as a show piece for the power of their Unreal Engine. This popular and powerful engine has pervaded the market although recent years have seen it stretched to its limits. Gears of War 3 is set to do reduce these limitations significantly with Unreal 3.5 that allows more realistic natural environments to be created.
read on...

A collection of our artisan reviewers are playing and reviewing Gears of War 3 and will be writing their anecdotal account soon.