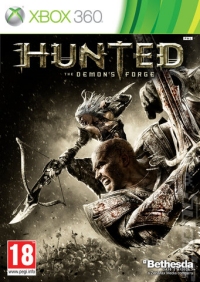 Hunted: The Demon's Forge is a Fighting game available on the 360. It can be played in Cooperative Splitscreen modes.

Hunted: The Demon's Forge is a Fighting game. Fighting games revolve around the interaction of two or more characters in some form of physical combat. Players learn to control characters through either memorisation of button combinations to access more advance moves, or by their reactions and accurate timing.

Hunted: The Demon's Forge can be played in a Cooperative mode. Cooperative Multiplayer games provide an experience that is played symaltaneously by multiple players. Unlike the simple arena competitive multiplayer style games where players try to kill the most enemies, true co-operative games are designed to take a group of players through a campaign experience together. This will involve sections where players have to work together to proceed - either from the sheer difficulty as in Halo 3 on 360 or by the design of levels such as LittleBigPlanet on PS3.

Hunted: The Demon's Forge can be played in a Splitscreen mode. Split Screen Multiplayer games involve multiple players by providing a portion of the screen for each person. This enables two, three or four players to be involved in the game using just one console. Although popular for the PS2, Gamecube and Wii it is becoming less common in modern 360 and PS3 games which are less willing to sacrifice horsepower from the visuals to accomodate the extra players - they opt for an online multiplayer mode instead.

Hunted: The Demon's Forge takes its co-op action cues from the Gears of War series but with a healthy dose of fantasy and loot collection it still feels distinct.

Gear's of War is a clear influence for Hunted: The Demon's Forge thanks to its adoption of a cover mechanic and a heavy focus on co-operative gameplay. Most interesting of these two systems is undoubtedly the co-op, which will play a vital role in the experience. While Hunted can be played alone (you will constantly be accompanied by a partner AI) the real fun will be playing with a friend either locally or online.
read on...

A collection of our artisan reviewers are playing and reviewing Hunted: The Demon's Forge and will be writing their anecdotal account soon.