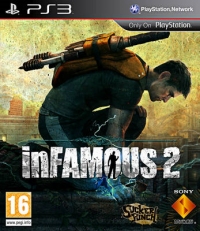 Infamous 2 is a Adventuring game available on the PS3. It can be played in Thirdperson Singleplayer modes.

Infamous 2 is a Adventuring game. Adventure games are enjoyed for two reasons: they provide enemy encounters that require tactics and strategy to conquor, and they create a fantasy world in which to explore and adventure.

Infamous 2 can be played in a Thirdperson mode. Third Person games view the world from over the right shoulder of the character being controlled. This enables you to see the character you are controlling as well as their surrounds. Although not as immersive as first person, third person games enable more complex moves and interactions with the environment.

Infamous 2 can be played in a Singleplayer mode. Single Player Campaign games focus on one player's experience. Rather than collaborate with other players either locally or online, players progress alone. The campaign style of gameplay offers a connected series of challenges to play through. These chapters work together to tell a story through which players progress. Single player games are able to focus on one experience of a scenario, so that it is usually a richer, more visceral game.

InFamous 2 continues the electrifying story of Cole McGrath, unwitting superhero and lightning-wrangler with new powers, a new enemy and a new city.

In my opinion what made the first InFamous so successful was that it managed to create a superhero mythos perfectly suited to the third-person videogame format. In a game adaptation developers must surely scratch their heads for the best way to represent an established character in an interactive way. Infamous 2 demonstrates that it is possible for videogames to create their own strong characters and design a set of abilities and powers which grows out of gaming itself.
read on...

InFamous 2 returns Cole McGrath to fighting his way through a city of hostiles, choosing whether to be the hero or the villain. The sense of locomotion and combat is compelling, but it's the way it plays with right and wrong that is the most fun - although more than a little scary how close the two extremes become.

I just fooled myself into believing a lie. InFamous 2 offered me binary choices of good or bad, but whatever I did the same cut scene played. Yet somehow in my mind's eye the story meshed perfectly my actions, whether I was behaving as a demon or a saint.
read on...

Infamous 2 may not quite nail the periphery, but the central gameplay is as strong as ever. Those looking for a role to play will find one here, but it does require some investment on the part of the player.

From a role play perspective, the first Infamous game was about establishing Cole MacGrath as a believable character. It defined his history, how he got his powers and set out his role in the world - Superhero.
read on...