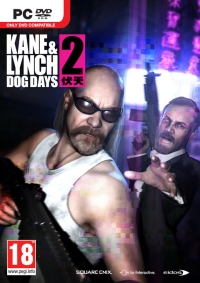 Kane and Lynch 2 is a Shooting game available on the PC PS3. It can be played in Firstperson Singleplayer Competitive modes.

Kane and Lynch 2 is a Shooting game. Shooting games present a world in which the character must shoot their way out of dangerous situations. They provide the player with an array of weapons tailored to specific tasks. This unavoidably involves a combination of fisticuffs and gun based fighting that dictates the violent nature of these experiences. Beneath this harsh exterior though is often an intricate tactile game - and this is usually what drives the player.

Kane and Lynch 2 can be played in a Firstperson mode. First Person games view the world from the eyes of the in-game character. You don't see the character themselves apart from their hands, gun or possibly feet as in Mirror's Edge. Because of the imediacy of the experience and sheer volume of visual information the player is offered First Person games lend themselves to the shooting genre. The FPS view enables players to immerse themselves in the experience and react quicker to events in the game. Other games have used a first person view to deliver an unusual perspective on an old genre - Mirror's Edge for example delivers a Platforming genre through a First Person view.

Kane and Lynch 2 can be played in a Singleplayer mode. Single Player Campaign games focus on one player's experience. Rather than collaborate with other players either locally or online, players progress alone. The campaign style of gameplay offers a connected series of challenges to play through. These chapters work together to tell a story through which players progress. Single player games are able to focus on one experience of a scenario, so that it is usually a richer, more visceral game.

Kane and Lynch 2 can be played in a Competitive mode. Competitive Multiplayer games provide experiences where players compete against each other and the computer. Obviously lending itself to sports and team games, these competitive engagements have also dominated the shooting and fighting genres because of the direct combat and expertise involved in each. Although these games were originally played in a split screen style, more recently they are played online via services such as PlayStation Network, Xbox Live and the Nintendo Wireless Connection.

We have our reporters and community keeping an eye on Kane and Lynch 2: Dog Days for you, and we'll keep you up to date with the latest developments as they happen. Kane and Lynch 2 is far better in theory than in practice. The concept is stylish, artistic, and subverts the shooter genre. Unfortunately, these elements don't match up to the competition. The result is an incredibly short game that still feels too long.

Having never played the original Kane and Lynch, I was immediately thankful that Dog Days requires no previous knowledge of the series, as it's very much a standalone story. It's also a relatively simple story: the titular pair of career criminals are due to play a part in a drug deal in Shanghai.
read on...

Attempting to replicate the look and feel of a seedy underground film, Kane and Lynch 2: Dog Days puts forward its unique presentation but lacks any kind of story or characterisation to pull it off effectively. I wasn't expecting a deep or soulful experience but my hope for a compelling gangster tale was quickly quashed by a dull and pointless story - absent of any likable component.

In a world full of generic first and third person shooters I was pleasantly surprised to see how Kane and Lynch 2 created a presentation style that was completely unique to the genre. Instead of aiming for smooth frame rates, high quality audio and crystal clear visuals the screen is thick with grainy filters and a shaky cam that physically makes you sick to watch.
read on...

Kane and Lynch 2 PS3 dresses you up as two desperately unlikable and bloody characters. Whilst interesting to watch, with impressive graphical filters, a poor story and repetitive game play diminish any sense of reward.

Once I start a game, I doggedly stick at it until the end. Only then do I join the debate about its worth. The original Kane and Lynch was an exception, proving so unfulfilling that I put it down early. I wasn't alone in that assessment, but despite the poor critical response, the sales figures justified a sequel.
read on...