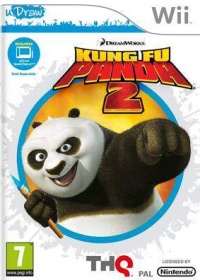 Kung Fu Panda 2 is a Adventuring game available on the Wii 360. It can be played in Thirdperson Singleplayer modes.

Kung Fu Panda 2 is a Adventuring game. Adventure games are enjoyed for two reasons: they provide enemy encounters that require tactics and strategy to conquor, and they create a fantasy world in which to explore and adventure.

Kung Fu Panda 2 can be played in a Thirdperson mode. Third Person games view the world from over the right shoulder of the character being controlled. This enables you to see the character you are controlling as well as their surrounds. Although not as immersive as first person, third person games enable more complex moves and interactions with the environment.

Kung Fu Panda 2 can be played in a Singleplayer mode. Single Player Campaign games focus on one player's experience. Rather than collaborate with other players either locally or online, players progress alone. The campaign style of gameplay offers a connected series of challenges to play through. These chapters work together to tell a story through which players progress. Single player games are able to focus on one experience of a scenario, so that it is usually a richer, more visceral game.

Kung Fu Panda 2 will let you show off your kung fu moves with Kinect and promises more than the everyday movie tie-in. It also looks like it will be a Kinect exclusive.

Kung Fu Panda (Wii) was well received for its polished appearance and family-friendly action. Kung Fu Panda 2 sees the series in the hands of a new developer, and adds Kinect support.
read on...

Kung Fu Panda 2 Wii is a martial arts adventure based on the hit movie in which players control Po with the uDraw tablet peripheral. It's an odd combination of gameplay and interface, but one which makes a straightforward movie tie-in more interesting.

At its core, Kung Fu Panda 2 on Wii is a typical game tie-in to a CG animated kids movie, of the kind that your humble Storygamer gets to review at least once a month. Controlling Po, the KFP of the title, the player will explore some simple environments, beat up some bad guys in straightforward arcade combat, and collect some collectibles.
read on...