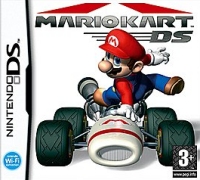 Mario Kart is a Racing game available on the DS 3DS SNES Wii. It can be played in Competitive Cooperative modes.

Mario Kart is a Racing game. Racing games, although sometimes seen as a sporting sub category, are a well established video game genre in their own right.

Mario Kart can be played in a Competitive mode. Competitive Multiplayer games provide experiences where players compete against each other and the computer. Obviously lending itself to sports and team games, these competitive engagements have also dominated the shooting and fighting genres because of the direct combat and expertise involved in each. Although these games were originally played in a split screen style, more recently they are played online via services such as PlayStation Network, Xbox Live and the Nintendo Wireless Connection.

Mario Kart can be played in a Cooperative mode. Cooperative Multiplayer games provide an experience that is played symaltaneously by multiple players. Unlike the simple arena competitive multiplayer style games where players try to kill the most enemies, true co-operative games are designed to take a group of players through a campaign experience together. This will involve sections where players have to work together to proceed - either from the sheer difficulty as in Halo 3 on 360 or by the design of levels such as LittleBigPlanet on PS3.

Mario Kart 3DS gets a boost from 3DS visual horsepower and 3D display. The higher resolution display takes the compact nature of Mario Kart DS and moves it towards a Wii look and feel.

This, combined with the 3D element of the upper 3DS display and you have the pieces for an exciting Mario Kart game. As you'll see from the screenshots the game looks to include tracks from existing and classic Mario Kart games as well as new courses created specifically to capitalise on the 3DS features.
read on... I guess it was inevitable that at some point I would have to play and review a videogame. True to form I've picked up a cast-off DS (fittingly just as the release of the 3DS marks the beginning of its end) and for the past few weeks I've been getting to grips with Mario Kart.

I realize that most people know something of the game, but suffice it to say that Mario has a kart and so do his friends, and they like to race each other. And while racing they like to blow each other up, or bump them off the track. Each of the different characters that you can play as or play against has their own distinct characteristics right down to their victory cry as they overtake a competitor, or cause some calamity to befall them. If you've had enough of racing you can try some of the missions where you have to perform tasks against the clock, and if you have a friend with a DS (I gather there are a few out there) you can link up and race each other.
read on...

Mario Kart on the SNES took the Mario platform formula and applied it to kart racing. This, the purest of Mario Karts, still knew at heart it was a racing game. And bceause of this it introduced many new gamers to the idea of mutliplayer video game racing.

He'd jumped and stomped his way into my heart and now once again that little plumber put the peddle to the metal and showed me exactly how cool a go kart could be. Mario's platform based adventures had lured me into video gaming and kept me enthralled with each new release but in 1993 Mario took to the road and with the release of Super Mario Kart I was forced to try out a genre of gaming that had never done it for me in the past.
read on...

I've been meaning to put a few words together about Mario Kart Wii for some time now. It is reviewed elsewhere on the site but it's always nice to get a second opinion, in my case from a returning gamer that had never played the previous six releases of this title. Can I just say for the record though, before you ask, yes it does come bundled with the wheel. Separate wheels can be purchased cheaply but go for an official one if you can. Once you get good, ditch the wheel and use the Wii-mote + Nun-chuk for a much more accurate drive.

Now the situation with Mario Kart Wii is interesting. It sold over a million in a month upon its release. It is pretty much out of stock leading into xmas. Almost everyone you speak to that has a Wii owns the game and loves it, yet there is very little in the way of public fanfare. Nintendo have a habit of doing this, Super Mario in the late 1980's sold some 18 mill ! At the time of writing (Dec 2008), the game has sold approx 10 million copies. That is approximately 1.5 million sold a month since April. Pretty much everyone in the office where I work has it, or is trying to get hold of it. I'm mystified by the lack of positive press about the game, it made me apprehensive about spending 35 pounds on it. Hopefully my review will shed some light on it's popularity and appeal.
read on...

Mario Kart returns on the Wii and fails to completely shake off its Double Dash inspired party game feel. This not withstanding, Nintendo comes to the table with some great innovations and additions to the series: a well designed clutch of new tracks. Online racing, Mii integration, motorbikes. half-pipes and new weapons. These new features complement the inclusion of historic course to make this the most complete Mario Kart experience to date.

With Nintendo heading off into the grand open waters of the causal gamers and family-friendly market, us hardcore gamers are left wondering whether they have forgotten all about us. But all it takes is a little look at their AAA first party games (read: Mario Galaxy, Metroid Prime and Zelda) and it is clear that currently they are doing very well keeping the gamers happy whilst courting the masses. The question is how long they can keep this up before one of these strategies impinges on the other.
read on...