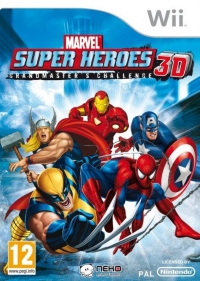 Marvel Superheroes 3D is a Adventuring game available on the Wii. It can be played in Thirdperson Singleplayer 3d modes.

Marvel Superheroes 3D is a Adventuring game. Adventure games are enjoyed for two reasons: they provide enemy encounters that require tactics and strategy to conquor, and they create a fantasy world in which to explore and adventure.

Marvel Superheroes 3D can be played in a Thirdperson mode. Third Person games view the world from over the right shoulder of the character being controlled. This enables you to see the character you are controlling as well as their surrounds. Although not as immersive as first person, third person games enable more complex moves and interactions with the environment.

Marvel Superheroes 3D can be played in a Singleplayer mode. Single Player Campaign games focus on one player's experience. Rather than collaborate with other players either locally or online, players progress alone. The campaign style of gameplay offers a connected series of challenges to play through. These chapters work together to tell a story through which players progress. Single player games are able to focus on one experience of a scenario, so that it is usually a richer, more visceral game.

Marvel Superheroes 3D can be played in a 3d mode. These types of games use shuttered, polarised or even red/green glasses technology to create a 3D visual experience. This not only adds depth and changes how the game looks, but also opens up new camera views and play styles. The PS3 supports 3DTV's and the 3DS provides a top screen that enables glasses free 3D output.

We have our reporters and community keeping an eye on Marvel Superheroes 3D for you, and we'll keep you up to date with the latest developments as they happen.

Marvel Superheroes 3D: Grandmaster's Challenge Wii promises much - 3D effects, five heroes big enough to have their own movies, and a host of villains - but turns out to be little more than another repetitive Wii party game.

3D is all the rage at the moment, with more and more movies requiring the wearing of tinted specs in the cinema, and a big push to get 3D TVs into the homes of wealthy early adopters.
read on...