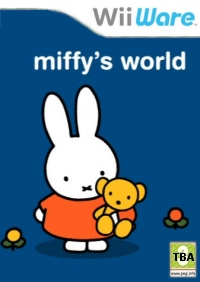 Miffy's World is a Adventuring game available on the Wii. It can be played in Assistance Cooperative modes.

Miffy's World is a Adventuring game. Adventure games are enjoyed for two reasons: they provide enemy encounters that require tactics and strategy to conquor, and they create a fantasy world in which to explore and adventure.

Miffy's World can be played in a Assistance mode. Assistance multiplayer games provide a cooperative experience where players of different abilities can collaborate. Some examples, such as Mario Galaxy or Modern Warfare Reflex on the Wii, enable a more experienced player to jump in and help the less experienced. This also works in reverse, where the expert player controls the main flow of the game and the novice plays a supporting role, such as in Viva Pinata on the 360, something that make these games ideal for families.

Miffy's World can be played in a Cooperative mode. Cooperative Multiplayer games provide an experience that is played symaltaneously by multiple players. Unlike the simple arena competitive multiplayer style games where players try to kill the most enemies, true co-operative games are designed to take a group of players through a campaign experience together. This will involve sections where players have to work together to proceed - either from the sheer difficulty as in Halo 3 on 360 or by the design of levels such as LittleBigPlanet on PS3.

We have our reporters and community keeping an eye on Miffy's World for you, and we'll keep you up to date with the latest developments as they happen.

Although Miffy has been eclipsed by the likes of Maisey, Peppa Pig and Charlie and Lola, I still have a soft spot for the monochrome bunny from my childhood. Because I struggle to persuade my offspring to read the books with me I was excited to discover a Miffy Wii-ware game.
read on...