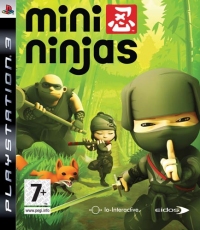 Mini Ninjas is a Adventuring game available on the PS3. It can be played in Thirdperson Singleplayer modes.

Mini Ninjas is a Adventuring game. Adventure games are enjoyed for two reasons: they provide enemy encounters that require tactics and strategy to conquor, and they create a fantasy world in which to explore and adventure.

Mini Ninjas can be played in a Thirdperson mode. Third Person games view the world from over the right shoulder of the character being controlled. This enables you to see the character you are controlling as well as their surrounds. Although not as immersive as first person, third person games enable more complex moves and interactions with the environment.

Mini Ninjas can be played in a Singleplayer mode. Single Player Campaign games focus on one player's experience. Rather than collaborate with other players either locally or online, players progress alone. The campaign style of gameplay offers a connected series of challenges to play through. These chapters work together to tell a story through which players progress. Single player games are able to focus on one experience of a scenario, so that it is usually a richer, more visceral game.

We have our reporters and community keeping an eye on Mini Ninjas for you, and we'll keep you up to date with the latest developments as they happen.

Mini Ninjas regressive style was refreshing for a waylaid gamer like me. Life hearts, checkpoints, and level-based design hark to a simpler time when plumbers and night-capped elves were in fashion rather than steroid-pumping, gun-toting square-jaws.

The only problem was my memory of simpler days was better than any time I had with Mini Ninjas. Beneath the retro skin is a game that is needlessly repetitive and unremarkable. Mini Ninjas is no advert for retro gaming. It's more an advert for tried-and-tested casserole design - someone needed to taste this while it simmered.
read on... Mini Ninjas is ridiculously sweet and charming throughout. Playing as one of six adorable pint sized heroes in their quest to save the world, the game is the perfect antidote to the many violent games out on the PlayStation 3 at the moment. It's a game that I found most enjoyable when taking it in turns with my nine year old cousin. It might not be a very long experience for the more experienced gamer but it's perfect for all the family to be entranced by and it teaches novice gamers some useful gaming skills.

From the very start, both me and my cousin were utterly beguiled by the visuals of the game. It all felt as if we were participating in a cartoon more than anything else. It was also immediately apparent to me that this was the perfect game for me and her to share together. You see Mini Ninjas is very innocent in its storytelling. There's nothing here that would scare a young player and it's nice to see such positive characters throughout the tale with no hint of negative stereotyping in sight. There's not even any killing or real violence as once you've hit an enemy a sufficient amount of time, it simply vanishes and a fluffy animal is released.
read on...

A breath of child-like adventuring fresh air, Mini Ninjas is a wonderfully light-hearted and easy romp through fantastic Japanese world overflowing with fun and a satisfying story. Taking a subtle eco-concious slant with combat, my son and I were really impressed with how appealing the whole game was and how it refreshing to find a kids game that wasn't tied to a film or a cheap cash-in.

There's honestly only so much cutesy action-platforming one father can take when it comes to videogames. If I wasn't sick on Mario and his innumerable clones then the Lego series would certainly finish me off and leave me begging for mercy when my son wanted to play games with his Dad. This is the kind of apathy that can leave me to dismiss games like Mini Ninjas as nothing more than half-baked movie tie-ins without the retina-searing 3D movie attached to it.
read on...