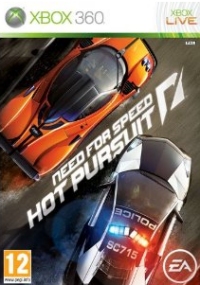 Need for Speed: Hot Pursuit is a Adventuring game available on the 360 Wii IPHONE. It can be played in Singleplayer modes.

Need for Speed: Hot Pursuit is a Adventuring game. Adventure games are enjoyed for two reasons: they provide enemy encounters that require tactics and strategy to conquor, and they create a fantasy world in which to explore and adventure.

Need for Speed: Hot Pursuit can be played in a Singleplayer mode. Single Player Campaign games focus on one player's experience. Rather than collaborate with other players either locally or online, players progress alone. The campaign style of gameplay offers a connected series of challenges to play through. These chapters work together to tell a story through which players progress. Single player games are able to focus on one experience of a scenario, so that it is usually a richer, more visceral game.

Need For Speed Hot Pursuit brings plenty of Burnout to the party, while returning to its cops and robbers roots.

With more than half an eye on Burnout's revolutionary multiplayer, Need For Speed fleshes out its delivery of high speed chases with the promise of a connected experience. A new Autolog mode enables you to connect, compare and compete with friends online and locally.
read on...

in truth, i've never been a huge fan of racing sims. however, where i have played them, i've always tended to go for straight down the line realism rather than street racing or customization gimmicks. as such, purer sims like Gran Turismo and Forza have tended to be much more my cup of tea than say Project Gotham Racing, (the ridiculous) Pimp My Ride, or the (terrible and thankfully short-lived) Juiced series.

one notable exception to this pattern, however, came out of my encounter with Burnout 3: Takedown. at the time it was released, one of my (then) uni housemates bought it and, despite some initial reluctance on my part, it soon became the house game.
read on...

Need for Speed Hot Pursuit Wii reminded me how great Blur was. Its four player split-screen kart racing with real cars and fantastical power-ups mirrors much of Bizarre Creations game. Ironically though, on the Wii it all makes much more sense and is the perfect complement for casual players to Criterion's 360/PS3 version.

Need for Speed has historically been exciting because it offered the chance to take part in illegal street races. The first versions of the game for Nintendo's console, Carbon (Wii), perpetuated this darker side of the franchise complete with scantily clad young ladies and police chases.
read on...

Need For Speed: Hot Pursuit made racers out of me and my friends. The social leader boards kept us coming back to shave seconds off lap times and the cops 'n robbers chases got us competing for the top spot. It more than made up for the lack of the increasingly rare split-screen mode.

Need For Speed: Hot Pursuit is the latest entry into the ever expanding Need For Speed series, but this time Burnout developer Criterion is in charge and Hot Pursuit has a lot to live up to.
read on... Need for Speed: Hot Pursuit brings the Burnout styling of the reborn console game to the iPhone. Although more diminutive than those versions, the range of real cars and clash of metal on metal still got the racer in me going.

Need for Speed: Hot Pursuit places you in the driving seat of some ridiculously powerful police cars as you try to tackle the menace of road racers. The 3D graphics look great, especially for a phone, while the mixture of game modes and controls make Hot Pursuit great fun to play. If you're a bit of a petrol head you'll love the range of cars available, even if you do wince at the thought of bashing them into another vehicle.
read on...

Need for Speed Hot Pursuit pulled a coup getting Criterion to bring Burnout's juice to the cops and robbers party. But for all the beauty and online integration this is still only a small step forward for the Need for Speed franchise.

Need For Speed has been promising to reinvent itself for a number of years now. So many clean slates have made the series somewhat schizophrenic. Some years it wants to return to the brash seediness of its early days whilst others it wants to embrace a wider audience and grow up. Last year saw Need for Speed split three ways, 360/PS3 had Shift for hardcore racers, Wii and DS had Nitro for casual gamers and there was a Browser game designed to snare passersby.
read on...