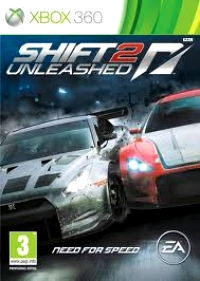 Need for Speed: Shift 2 is a Racing game available on the 360. It can be played in Singleplayer Competitive modes.

Need for Speed: Shift 2 is a Racing game. Racing games, although sometimes seen as a sporting sub category, are a well established video game genre in their own right.

Need for Speed: Shift 2 can be played in a Singleplayer mode. Single Player Campaign games focus on one player's experience. Rather than collaborate with other players either locally or online, players progress alone. The campaign style of gameplay offers a connected series of challenges to play through. These chapters work together to tell a story through which players progress. Single player games are able to focus on one experience of a scenario, so that it is usually a richer, more visceral game.

Need for Speed: Shift 2 can be played in a Competitive mode. Competitive Multiplayer games provide experiences where players compete against each other and the computer. Obviously lending itself to sports and team games, these competitive engagements have also dominated the shooting and fighting genres because of the direct combat and expertise involved in each. Although these games were originally played in a split screen style, more recently they are played online via services such as PlayStation Network, Xbox Live and the Nintendo Wireless Connection.

Need for Speed Shift 2 brings realism into the cockpit with its impressively effective helmet camera. The real test however, will be whether the driving is as believable as the sense of speed.

Shift was last year's attempt to reinvigorate the Need for Speed franchise. With the media circus having moved on to Criterion's Need for Speed Hot Pursuit, you could be forgiven for thinking that Shift was to be swept under the corporate carpet.
read on...

hardly not even just six months after EA got together with Criterion to give us Need For Speed: Hot Pursuit, the unceasingly generous scoundrels in their department of brumbrum have now joined forces with Slightly Mad to give us all Shift 2: Unleashed.

the Need For Speed moniker has an odd history. first it was the name of a specific game. then that game became a series. Then, over more time, it slowly became a sort of all-purpose string of (three) words to put in the title of any driving game that EA made. now, however, it seems that perhaps they are rueing their choice of splashing it around everywhere.
read on... Need for Speed: Shift 2 Unleashed finally brings a driver's game into the Need For Speed stable. Night racing, changin weather and track modelling all contribute, but the real star of the show is how it feels to drive.

If you like to drive (as well as play at driving) like me, there is plenty to be excited about in the return of Shift. The previous game was EA's attempt to move their Need for Speed franchise in a more realistic direction - to connect with petrol-heads like you and I.
read on...