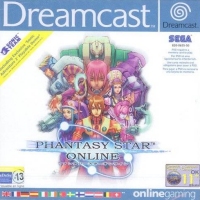 Phantasy Star Online is a Adventuring game available on the DREAMCAST. It can be played in Thirdperson Cooperative modes.

Phantasy Star Online is a Adventuring game. Adventure games are enjoyed for two reasons: they provide enemy encounters that require tactics and strategy to conquor, and they create a fantasy world in which to explore and adventure.

Phantasy Star Online can be played in a Thirdperson mode. Third Person games view the world from over the right shoulder of the character being controlled. This enables you to see the character you are controlling as well as their surrounds. Although not as immersive as first person, third person games enable more complex moves and interactions with the environment.

Phantasy Star Online can be played in a Cooperative mode. Cooperative Multiplayer games provide an experience that is played symaltaneously by multiple players. Unlike the simple arena competitive multiplayer style games where players try to kill the most enemies, true co-operative games are designed to take a group of players through a campaign experience together. This will involve sections where players have to work together to proceed - either from the sheer difficulty as in Halo 3 on 360 or by the design of levels such as LittleBigPlanet on PS3.

We have our reporters and community keeping an eye on Phantasy Star Online for you, and we'll keep you up to date with the latest developments as they happen.

Phantasy Star Online was a dreamlike experience of unimagined multiplayer possibilities. Along with the demise of its Dreamcast platform, this pinacle of my 90's gaming marked my departure from videogames for some time.