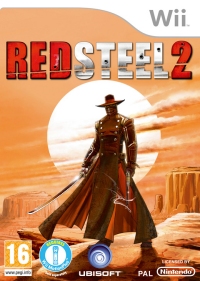 Red Steel 2 is a Shooting game available on the Wii. It can be played in Firstperson Singleplayer modes.

Red Steel 2 is a Shooting game. Shooting games present a world in which the character must shoot their way out of dangerous situations. They provide the player with an array of weapons tailored to specific tasks. This unavoidably involves a combination of fisticuffs and gun based fighting that dictates the violent nature of these experiences. Beneath this harsh exterior though is often an intricate tactile game - and this is usually what drives the player.

Red Steel 2 can be played in a Firstperson mode. First Person games view the world from the eyes of the in-game character. You don't see the character themselves apart from their hands, gun or possibly feet as in Mirror's Edge. Because of the imediacy of the experience and sheer volume of visual information the player is offered First Person games lend themselves to the shooting genre. The FPS view enables players to immerse themselves in the experience and react quicker to events in the game. Other games have used a first person view to deliver an unusual perspective on an old genre - Mirror's Edge for example delivers a Platforming genre through a First Person view.

Red Steel 2 can be played in a Singleplayer mode. Single Player Campaign games focus on one player's experience. Rather than collaborate with other players either locally or online, players progress alone. The campaign style of gameplay offers a connected series of challenges to play through. These chapters work together to tell a story through which players progress. Single player games are able to focus on one experience of a scenario, so that it is usually a richer, more visceral game.

We have our reporters and community keeping an eye on Red Steel 2 for you, and we'll keep you up to date with the latest developments as they happen.

Red Steel 2 is a hardcore Wii game -- a rarity. It joins Madworld, Dead Space Extraction, The Conduit and House of the Dead Overkill in offering something for the old time hardcore gamer. But for all the fan service and lightsaber sword-work, on the Wii the experience feels a little solitary.

If you hadn't realised already, this is the follow up to the Red Steel Wii launch game. Back then no one really understood what the Wii was all about, or whether it would sell. Consequently it simply took Time Splitters and James Bond from the Gamecube and ported it straight to Nintendo's new console with added waggle sword fights and pointing based shooting. It was a game that worked on its own merits, and limits of the technology, but struggle to connect with an interested audience.
read on...