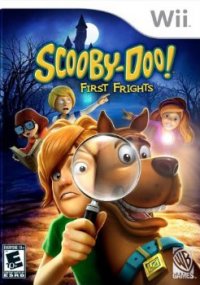 Scooby-Doo First Frights is a Adventuring game available on the Wii. It can be played in Thirdperson Cooperative modes.

Scooby-Doo First Frights is a Adventuring game. Adventure games are enjoyed for two reasons: they provide enemy encounters that require tactics and strategy to conquor, and they create a fantasy world in which to explore and adventure.

Scooby-Doo First Frights can be played in a Thirdperson mode. Third Person games view the world from over the right shoulder of the character being controlled. This enables you to see the character you are controlling as well as their surrounds. Although not as immersive as first person, third person games enable more complex moves and interactions with the environment.

Scooby-Doo First Frights can be played in a Cooperative mode. Cooperative Multiplayer games provide an experience that is played symaltaneously by multiple players. Unlike the simple arena competitive multiplayer style games where players try to kill the most enemies, true co-operative games are designed to take a group of players through a campaign experience together. This will involve sections where players have to work together to proceed - either from the sheer difficulty as in Halo 3 on 360 or by the design of levels such as LittleBigPlanet on PS3.

We have our reporters and community keeping an eye on Scooby-Doo First Frights for you, and we'll keep you up to date with the latest developments as they happen.

Scooby-Doo First Frights Wii has simply too much fighting and not enough fleeing to feel like a real Scooby story. This monster (button) mash is a simplistic and solid action platformer that will be fun for young fans, but which doesn't live up to the Lego movie adaptations it tries to mirror.

Scooby-Doo was created over forty years ago, and has been starring in cartoons, live-action movies, and spin-off merchandise ever since. The first computer game magazine I ever bought featured a rave review of a Scooby-Doo game which, it being the mid-1980s at the time, saw the cowardly dog squeezed into a side-scrolling platform game, punching wave after wave of ghosts.
read on...