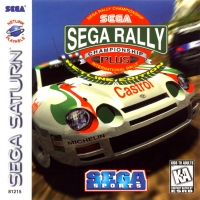 Sega Rally is a Racing game available on the SATURN 360. It can be played in Competitive Splitscreen modes.

Sega Rally is a Racing game. Racing games, although sometimes seen as a sporting sub category, are a well established video game genre in their own right.

Sega Rally can be played in a Competitive mode. Competitive Multiplayer games provide experiences where players compete against each other and the computer. Obviously lending itself to sports and team games, these competitive engagements have also dominated the shooting and fighting genres because of the direct combat and expertise involved in each. Although these games were originally played in a split screen style, more recently they are played online via services such as PlayStation Network, Xbox Live and the Nintendo Wireless Connection.

Sega Rally can be played in a Splitscreen mode. Split Screen Multiplayer games involve multiple players by providing a portion of the screen for each person. This enables two, three or four players to be involved in the game using just one console. Although popular for the PS2, Gamecube and Wii it is becoming less common in modern 360 and PS3 games which are less willing to sacrifice horsepower from the visuals to accomodate the extra players - they opt for an online multiplayer mode instead.

We have our reporters and community keeping an eye on Sega Rally for you, and we'll keep you up to date with the latest developments as they happen. Sega Rally is an arcade classic with real motoring credentials. It soon became my racing game of choice, home and away.

First off, I just need to say it. Sega Rally, for me, is the greatest racer of all time.
read on...

This classic 90's arcade rally racing game was made famous for its floaty handling that demanded both a deft touch and detailed course knowledge from gamers. It has here been updated for modern consoles while keeping to its original style and feel of play.

Racing games, although sometimes seen as a sporting sub category, are a well established video game genre in their own right. They can feature a variety of driving styles ranging from the fantastical arcade racing focusing on thrills and spills, to the super realistic simulations that recreate every aspect of real life driving.
read on...