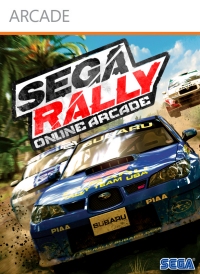 Sega Rally Online Arcade is a Racing game available on the 360. It can be played in Singleplayer Competitive Splitscreen modes.

Sega Rally Online Arcade is a Racing game. Racing games, although sometimes seen as a sporting sub category, are a well established video game genre in their own right.

Sega Rally Online Arcade can be played in a Singleplayer mode. Single Player Campaign games focus on one player's experience. Rather than collaborate with other players either locally or online, players progress alone. The campaign style of gameplay offers a connected series of challenges to play through. These chapters work together to tell a story through which players progress. Single player games are able to focus on one experience of a scenario, so that it is usually a richer, more visceral game.

Sega Rally Online Arcade can be played in a Competitive mode. Competitive Multiplayer games provide experiences where players compete against each other and the computer. Obviously lending itself to sports and team games, these competitive engagements have also dominated the shooting and fighting genres because of the direct combat and expertise involved in each. Although these games were originally played in a split screen style, more recently they are played online via services such as PlayStation Network, Xbox Live and the Nintendo Wireless Connection.

Sega Rally Online Arcade can be played in a Splitscreen mode. Split Screen Multiplayer games involve multiple players by providing a portion of the screen for each person. This enables two, three or four players to be involved in the game using just one console. Although popular for the PS2, Gamecube and Wii it is becoming less common in modern 360 and PS3 games which are less willing to sacrifice horsepower from the visuals to accomodate the extra players - they opt for an online multiplayer mode instead.

SEGA Rally Online Arcade will blend arcade and console racing into a neat downloadable package for XBLA and PSN.

The game that swallowed many a school kid's lunch money is returning in a downloadable format aimed at both SEGA Rally veterans and new racers. Inspired by SEGA Rally Revo and SEGA Rally 3, SEGA Rally Online Arcade will attempt to blend the best elements of the classic series' arcade and console iterations in a new HD title.
read on... The Sega Rally franchise is one that holds a special place in my gaming consciousness, so when any new version is announced I am always going to give it a spin. This latest version is essentially a home port of 2008's Sega Rally 3, which was developed alongside the PS3 and Xbox 360 game from the same time.
read on...