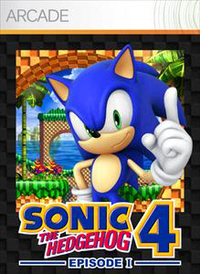 Sonic 4 Episode 1 is a Platforming game available on the 360. It can be played in Singleplayer modes.

Sonic 4 Episode 1 is a Platforming game. Platform games task you with getting from point A to point B. The world you journey through is usually based on different levels, and populated with enemies, switches and lifts to be negotiated. As you work through each level you pick up various collectables that accrue score, special abilities and access to hidden areas.

Sonic 4 Episode 1 can be played in a Singleplayer mode. Single Player Campaign games focus on one player's experience. Rather than collaborate with other players either locally or online, players progress alone. The campaign style of gameplay offers a connected series of challenges to play through. These chapters work together to tell a story through which players progress. Single player games are able to focus on one experience of a scenario, so that it is usually a richer, more visceral game.

We have our reporters and community keeping an eye on Sonic 4 Episode 1 for you, and we'll keep you up to date with the latest developments as they happen.

Sonic 4 Part 1 360 takes Sonic back to 2D glory, but returning to the original gameplay style proves that sometimes the past is sometimes best left behind.

Some sixteen years since Sonic the Hedgehog 3 hit the Megadrive, Sega has finally released the next canonical game in the series. Coming from Sega's in house team the new downloadable title is a return to the 2D gameplay of the original. Managing to capture much of the feel of those games, Sonic 4 could well have be seen as a success, but tastes have evolved since 1994.
read on...